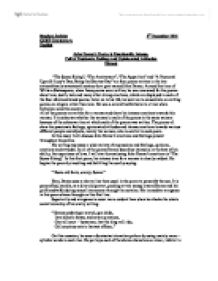 Stephen Jenkins 5th December 2001 GCSE Coursework English John Donne's Poetry is Emotionally Intense, Full of Passionate Feelings and Opinionated Attitudes. Discuss "The Sunne Rising", "The Anniversary", "The Apparition" and "A Nocturnal Upon St Lucy's Day; Being the Shortest Day" are four poems written in the late sixteenth/early seventeenth century by a poet named John Donne. Around the time of William Shakespeare, when these poems were written, he was renowned for his poems about love, death, hate and many other strong emotions, which are displayed in each of the four aforementioned poems. Later on in his life, he went on to concentrate on writing poems on religion rather than love. He was a committed Catholic in a time when Catholics ruled the country. All of the poems are written for a woman and show his intense emotions towards this woman. It is unknown whether the woman in each of the poems is the same woman because of the unknown time at which each of the poems was written. ...read more.

In this poem, his manner towards the woman is that she and he are both equal (for the first two verses), but it becomes evident he feels he is in control of her, for example, when he declares: " She is all states, and all princes, I " He uses royalty in this case to put across his feeling they are both superior to everybody else, but really he is in control of the woman because princes would rule a state at the time. His emotion is clearly shown when later on in the dialogue he describes here as "The India's of spice and Myne" which were two of the most wonderful, valuable treasures in the world. However, it does shown that in the poem he sees her as beautiful and valuable, but a beautiful and valuable object. Nevertheless, his feelings towards the woman are not any weaker than in the three other poems I studied although his actual true loving for her can be doubted. ...read more.

His character in the poem comes across as a conceited, disdainful, egotistical and somewhat pompous individual, but an individual with great feelings towards his woman. His use of language, for example the "thy" and "thine" form show he is offending the sun by using a form of speech that was spoken to people you know very well or people you feel are inferior to you. In this situation, it is the latter, because he is showing a constant lack of respect for the sun. Also, on occasions during the poem he uses monosyllabic lines, which show his anger towards something. This kind of intonation patter appears on this line where he is being dismissive towards the sun. " Nor houres, dayes, months, which are the rags if time. " Donne is dismissive towards many items or people during the course of the poem, including royalty. Everything else, he believes, apart from he and the woman, is insignificant in "The Sunne Rising". ...read more.