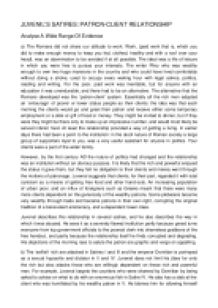 ﻿JUVENIL?S SATIRES: PATRON-CLIENT RELATIONSHIP Analyse A Wide Range Of Evidence a) The Romans did not share our attitude to work. Work, (paid work that is, which you did to make enough money to keep you fed, clothed, healthy and with a roof over your head), was an abomination to be avoided if at all possible. The ideal was a life of leisure in which you were free to pursue your interests. The writer Pliny who was wealthy enough to own two huge mansions in the country and who could have lived comfortably without doing a stroke, used to occupy every waking hour with legal advice, politics, reading and writing. For the poor, paid work was inevitable, but for anyone with an education it was unendurable, and there had to be an alternative. The alternative that the Romans developed was the ?patron-client? system. Essentially all the rich men adopted an ?entourage? of poorer or lower status people as their clients: the idea was that each morning the clients would go and greet their patron and receive either some temporary employment or a dole or gift of food or money. They might be invited to dinner, but if they were they might be there only to make up an impressive number, and would most likely be served inferior food. At least the relationship provided a way of getting a living. In earlier days there had been a point to the institution: in the aloof nature of Roman society a large group of supporters loyal to you, was a very useful assistant for anyone in politics. Your clients were a part of the wider family. However, by the first century AD the nature of politics had changed and the relationship was an institution without an obvious purpose. ...read more.

Unfortunately though, in Juvenal's mind, they are all the bad aspects of this relationship. In Juvenal's writings, all of the honour and nobility of this class-bridging relationship is gone, as evidenced in a passage from his tenth Satire, in which he describes a Consul's parade of white robed clients marching so dutifully with their meal tickets in hand. Instead of retaining or acquiring any prestige or dignity, they have been forced to become ?lap dogs? or hired attendants for the rich patrons, sacrificing dignity for 6.25 sesterces a day. So Juvenal writes, but how reliable a source is he? It must be remembered that Juvenal is a satirist, and therefore well versed in the use of exaggeration and fabrication in order to make his point. One must remember this before using him for an historically accurate source. For a modern parallel, one could hardly use Oliver Stone?s Hollywood blockbuster ?JFK? as a ?be-all-end-all? when examining United States late President, John F Kennedy?s assassination. However, despite this precaution, for the most part, there are other sources that support many of Juvenal's complaints. Martial, for instance, a somewhat less scathing satirist contemporary of Juvenal's, confirms the hassles clients went through to satisfy their ?arrogant? patrons. He wrote one letter to his patron where he regrets that he, ". . . forgot to call you 'My Lord.' How much did this liberty cost me? You knocked a dollar off my allowance." 10(Shelton 16). Epictetus, a Greek philosophy teacher, adds additional support to Juvenal's barbs. In his writings, he describes how clients must be humble, and not be angry if they are snubbed or not offered a dinner invitation. Friedlander explains part of the text, "The few honoured few paid dear in morning visits, bearing the patron company, and flattery." ...read more.