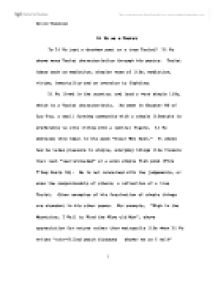 Li Po as a Taoist

Li Po as a Taoist Is Li Po just a drunken poet or a true Taoist? Li Po shows many Taoist characteristics through his poetry. Taoist ideas such as mediation, simpler ways of life, mediation, virtue, immortality and an aversion to fighting. Li Po lived in the country, and lead a very simple life, which is a Taoist characteristic. As seen in Chapter 80 of Lao Tzu, a small farming community with a simple lifestyle is preferable to city living with a central figure. Li Po embraces this ideal in his poem "Clear Wet Dawn." It shows how he takes pleasure in simple, everyday things like flowers that look "tear-streaked" or a even simple fish pond (Five T'Ang Poets 53). He is not concerned with the judgements, or even the companionship of others; a reflection of a true Taoist. Other examples of his fascination of simple things are abundant in his other poems. For example, "High in the Mountains, I Fail to Find the Wise old Man", shows appreciation for nature rather than metropolis life when Li Po writes "rain-filled peach blossoms shower me as I walk" (Five T'Ang Poets 66). ...read more.

Abstaining hardly seems to be a concept Li Po is familiar with as seen in "Waking up Drunk on a Spring Day." All day long, he sits, contemplating his lot in life, the natural world around him, and the atmosphere is, in general, very contemplative. However, his abuse of alcohol is not exactly within the Taoist ideal of fasting. Though Li Po's poetry goes beyond the superficial, it does not necessarily meditate in correspondence with the Tao principle. This brings about a complexity in his poetry that otherwise would be lacking. When in an inebriated state, people's emotions are more extreme and variable than those of a sober individual are. These extreme emotions make for a more creative state of mind. It was also perhaps the finite nature of drunkenness, along with his Taoist principles that lead Li Po to question immortality. Li Po's idea of immortality is quite reflective of that of the Tao's. In the selected poems, he never states outright what his views on immortality are, but in "Conversations among Mountains" and "Drinking in the Moonlight" he gives the reader an idea of his views. ...read more.

Chapter 5 shows that people are sacrificial and chapter 18 shows that "when the country is in chaos and confusion, it is then that there are virtuous officials". This raises the question then, how dissimilar are Li Po's and Lao Tzu's view of immortality? If the Tao can allow for sacrificial human life, what does that say about its ultimate significance? If Li Po truly sees it as a measure that ends not in life, but continues in purpose, then why is he so adverse to defense? Li Po embraces the Taoist ideal of a simple life, but his drunken style of meditation is skewed from the emptiness of the Tao. His immortality beliefs are similar to those of the Tao, yet Li Po is more pacifist than the Tao when it comes to an aversion to fighting. Sacrificing a human life, to the Tao, does not reject the spirit entirely, but returns it in another physical form so a human's life has little ultimate significance. This runs parallel to Li Po's idea that there are multiple worlds. Li Po's aversion to defense must then come from liking the world and the physical state he is in. Celine Thomerson 1 ...read more.