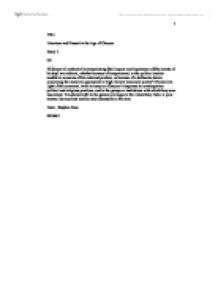 Literature and Dissent in the Age of Chaucer

So we see here that we go from a situation where the prioress is satirised for aspiring to be more than just a religious dignitary, to the monk who literally denounces that for which he is meant to stand. Again however, as with the prioress, Chaucer portrays a picture closer to that of an aristocratic landowner than a man of the cloth. We can see this in line193: "I seigh his sleves purfiled at the hond With grys, and that the fyneste of a lond; And for to festne his hood under his chyn, He hadde gold ywroght a ful curious pyn; A love knotte in the greter ende ther was. Again Chaucer employs the imagery of a gold "love knot" around the monks neck, in a similar fashion to the way in which he places the gold crowned A around the prioresses neck. The placing of such a symbol around the neck of clergy seems significant in that it symbolises a weight or a burden. Not to the prioress and the monk themselves, but a burden to their original cause. I believe that the imagery of a heavy symbol of a love to which they are forbidden weighing them down by being tied around their neck may represent the thing which is stopping them from reaching any religious enlightenment, as they are still bound by earthly desires such as hunting and high fashion. I believe that this sign of love represents the love of all things earthly and forbidden. Therefore what we can see from Chaucer's description of the Prioress and the monk is that he is most definitely employing estates satire with regards to the clergy, and as such is making a social comment upon the religious practices and doctrines of his day. ...read more.

Why then did he choose to make the pardoner "out of Rome"? Being that we are told that everyone else is of Britian, with exceptions of the knight who is given no fixed place. I believe that this is an important point due to the fact that at the time Rome was a hot spot for political and religious upheaval. I believe that Chaucer has unintentionally (or even possibly with intent) let show that his ideals lie with Avignon. It seems to me that the pardoner's section of the general prologue is a direct attack on not only religion, but more specifically religion in Rome. I also believe this to be another reason for why the attack upon the pardoner was so much more fired up than the attacks upon other clergy, because although the topic of religious malpractice is one which Chaucer obviously feels for, I my theory that Chaucer is an Avignon sympathiser holds then the pardoner's tale will inevitably have more passion to it. In conclusion I believe that Chaucer presents us with a spectrum of righteousness, by contrasting the placement of the characters in the religious hierarchy to their actual level of morality, and moreover it would be unwise to assume that Chaucer had only this one end in view when he wrote the Canterbury tales. Whether or not Chaucer consciously or sub-consciously intended to be both Satirical and exercise his poetic skill, it does not matter because as it turns out he has managed to do both. At the time it could be possible to read Chaucer in isolation to the subjects of religion and politics without doing any damage to his literary career, however I believe that both of the themes of religion and politics run through and unify the text as a whole. ...read more.