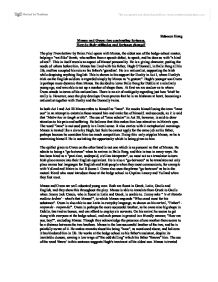 Manus and Owen: two contrasting fortunes. How do their attitudes and fortunes change?

Rebecca Hong Manus and Owen: two contrasting fortunes. How do their attitudes and fortunes change? The play Translations by Brian Friel opens with Manus, the eldest son of the hedge-school master, helping a "waiflike" Sarah, who suffers from a speech defect, to speak, and he does so with "a kind of zeal". This in itself reveals an aspect of Manus' personality. He is a giving character, putting the needs of others before him. Manus has lived with his father, Hugh O'Donnell, in Baile Beag all his life, and has accepted his role as his father's 'guardian'. He is a nationalist, supporting the Irish while despising anything English. This is shown in his support for Doalty in Act I, where Doalty's trick on the English soldiers is regarded simply by Manus as "a gesture". Hugh's younger son Owen is perhaps more dynamic than Manus. He decided to leave Baile Beag for Dublin at a relatively young age, and was able to set up a number of shops there. At first we are unclear as to where Owen stands in terms of his nationalism. There is an air of ambiguity regarding just how 'Irish' he really is. However, once the play develops Owen proves that he is an Irishman at heart, becoming a nationalist together with Doalty and the Donnelly twins. In both Act I and Act III Manus refers to himself as "lame". He mocks himself using the term "lame son" in an attempt to entertain those around him and make fun of himself, and succeeds, as it is said that "Maire has to laugh at this". ...read more.

The relationship between Manus and Owen is distant at first. Upon seeing eachother for the first time in six years they greet one another rather formally-"And Manus!" "You're welcome Owen". Owen then turns his back to face the others at the school. Though Owen makes physical contact with each of the school members, there is no contact with Manus, creating a slightly cold atmosphere amongst them. Despite this, Manus is the only one to ask about his arrival, and the only one to care whether Owen has been enlisted as a soldier. When speaking to Manus about this matter Owen is rather patronising and condescending. His use of "quiant" and "archaic" to describe their language supports this further. Owen uses the phrase "you people" to describe the people of Baile Beag, suggesting his detachment from his Irish roots-he no longer identifies with them. Owen also suggests he is in support of anglicizing place names by using the phrase "the King's good English". He thinks that English is a 'good' language, superior to all others. This is supported by his blas� attitude towards being called Roland. He says "Owen-Roland-what the hell. It's only a name. It's the same me, isn't it?". This carries great significance, as it shows Owen's attitude regarding the changing of place names, though the fact that he follows this question with the phrase "Well, isn't it?" gives reason for us to believe that he is looking for assurance, that he is unsure of himself. ...read more.

This is strengthened by their decision to leave the place name Tobair Vree as it is, rather than try to find it's English equivalent. This brings Owen and Yolland closer as friends, and is reflected in Yolland's relationship with Manus later on. When Manus reveals he has a new job Yolland is sincerely happy for him, and Manus is also sincere in his reply, as they shake hands "warmly" on his departure. Manus is portrayed throughout the play as a caring character, especially in his treatment of Sarah. He speaks to her with a warmth that no other in the hedge school does-"Those are lovely, Sarah". Manus is very affectionate when dealing with Sarah, and though this behaviour may be an everyday occurrence for him, Sarah has read more into the situation than he has intended. He kisses her on the head and hugs her a few times, and she is full of "embarassment" when he receives the flowers given to him, yet he seems unaware of Sarah's feelings for him. On occasions he simply ignores what she has to say, for example when she actually is able to say her name to Owen she is "elated at her success", and shares this with Manus, who just ignores her. Despite this she is fiercely loyal to Manus, and upon seeing Maire and Yolland together instinctively calls his name. Manus' departure leaves her feeling upset and guilty, and Manus kindly says she is not to blame-"you did no harm at all", yet he addresses her with no warmth or concern, as he has previously done. ...read more.