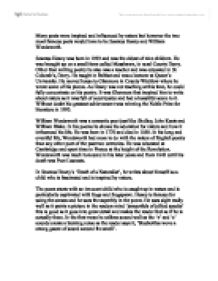 Many poets were inspired and influenced by nature but however the two most famous poets would have to be Seamus Heany and William Wordsworth.

Many poets were inspired and influenced by nature but however the two most famous poets would have to be Seamus Heany and William Wordsworth. Seamus Heany was born in 1939 and was the eldest of nine children. He was brought up on a small farm called Mossbawn, in rural County Derry. Other than writing poetry he also was a teacher and was educated in St. Columb's, Derry. He taught in Belfast and was a lecturer at Queen's University. He moved house to Glanmore in County Wicklow where he wrote some of his pieces. As Heany was not teaching at this time, he could fully concentrate on his poetry. It was Glanmore that inspired him to write about nature as it was full of countryside and had a beautiful scene to it. Without doubt his greatest achievement was winning the Noble Prize for literature in 1995. William Wordsworth was a romantic poet just like Shelley, John Keats and William Blake. In his poems he shows his adoration for nature and how it influenced his life. He was born in 1770 and died in 1850. In his long and eventful life, Wordsworth had more to do with the nature of English poetry than any other poet of the past two centuries. He was educated at Cambridge and spent time in France at the height of the Revolution. Wordsworth was much honoured in his later years and from 1843 until his death was Poet Laureate. ...read more.

In the second verse it is the opposite, everything turns bad for the speaker as seen in the language, tone and the way in which he describes the blackberries. Sight is used exceptionally well, 'a rat grey fungus'. This depicts an ugly and unwelcoming image in the reader's mind. Again it seems foul and vulgar as the language is sharp, 'glutting'. He brings into play the sense of smell effectively, 'smelt of rot'. This illustrates a picture of sadness for the speaker. The poem ends on a very unhappy beat: 'each year I hoped they'd keep, knew they would not'. In 'Blackberry Picking' the poem has a half rhyme and a few rhyming couplets, 'clot' and 'knot' , 'rot' and 'not'. Similar to 'Death of a Naturalist' this poem has two verses and the main theme is nature and Heany's fixation with it. Also a common feature just as 'Death of a Naturalist' , it all starts of beautifully with the blackberry picking and everything is fine but then all of a sudden it all turns sour and disappointing end as they begin to rot. This somewhat of a childish nature and the enthusiasm for picking the blackberries but later on in the second verse he matures and wises. Wordsworth poems are a different style from Heany's poems but they both share the same adoration and communion with nature. In Wordsworth's 'The World Is Too Much with Us' it is written in sonnet form - two verses composed of an octave and a sestet. ...read more.

The poem is a very personal poem and there is a lot of personification used that indicates that the writer was writing of past experiences with himself and nature. In Wordsworth poems he would refer to nature in a more positive way than Heany. Imagery in the four poems was used excellently throughout, although Heany did use more similes and metaphors. Heany's rhyming scheme was different; he didn't use distinct line of rhyming, he mainly used half rhyme or alliteration, however on the other hand Wordsworth used rhyming on alternate line and at the end of a verse there was a rhyming couplet. The mood was completely different for both poets, Heany would start his poems on a positive beat and onwards it would change to negative and sour to represent what life is really like and that is isn't always fair. Wordsworth would start his poems on a sad tone of even on an angry tone but it would gradually change to a positive mood. Both of the poets have based their poems on real experiences with nature. Heany tends to write his poems from a child's prospective and Wordsworth on an adults point of view. In William Wordsworth's poem he writes about nature entirely but Heany is ambivalent. The style of each poet is completely different, Wordsworth is more of a romantic poet while Heany is more modern and realistic. Heany uses all senses, Wordsworth tends to concentrate just on sight. All in all two very talented poets, Seamus Heany and William Wordsworth. ...read more.