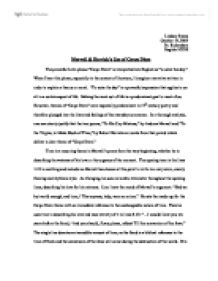 Lindsay Ryans October 13, 2003 Dr. Richardson English 1023H Marvell & Herrick's Use of Carpe Diem The powerful Latin phrase "Carpe Diem" is interpreted into English as "to seize the day." When I hear this phrase, especially in the context of literature, I imagine a narrative written in order to explain a theory or moral. "To seize the day" is a powerful expression that applies to us all in a certain aspect of life. Making the most out of life is a predominant goal to most of us. However, themes of "Carpe Diem" were especially predominant in 17th century poetry and therefore plunged into the lives and feelings of the everyday commoner. In a thorough analysis, one can clearly justify that the two poems, "To His Coy Mistress," by Andrew Marvell and "To the Virgins, to Make Much of Time," by Robert Herrick are works from that period which deliver a clear theme of "Carpe Diem." Time is a recurring theme in Marvell's poem from the very beginning, whether he is describing the vastness of his love or the urgency of the moment. The opening tone in the lines 1-21 is soothing and melodic as Marvell has chosen at this point to write in a very slow, evenly flowing and rhythmic style. ...read more.

The impression is that his mistress is, in fact, desirous, but holding back in a timid manner which to him is a waste of time. Marvell suggests in lines 37-40 that they, "...sport us while we may/ And now, like amorous birds of prey, /Rather at once our time devour/ Than languish in his slow-clapped power." This line begins the idea of Carpe Diem. Instead of letting time eat away at them, it is best to seize the moment of love as a bird would seize its prey. They should engage the power and strength of their love aggressively to thwart the ravages of time by living in the moment and giving into their desires. The actual act of making love is metaphorically described in lines 41-44: "Let us roll all our strength and all/ Our sweetness up into one ball, /And tear our pleasures with rough strife/ Through the iron gates of life." Marvell concludes that although they cannot stop time, they can still rebel against the finality of time by living in the moment and consummating their love. Like Andrew Marvell, Robert Herrick follows an iambic scheme, but his meter reverts back and forth between tetrameter and trimeter giving the verse a melodic and smooth tone. ...read more.

Although they narrate in a different tone and style, both bring us to a reality of not taking time for granted. Even though the poems are very similar, they also differ in many ways. For one, Herrick's poem is a narrative poem spoken to a general audience of young people, whereas Marvell's poem is a poem written from one love to another. "To the Virgins, to Make Much of Time" is a poem that leaves its readers with a feeling of seizing the day for themselves. On the contrary, "To His Coy Mistress" is a poem that leaves its readers with a sense of seizing the day for the characters it deals with. Another difference is that "To the Virgins, to Make Much of Time" speaks of the race for time against the sun in conjunction to the sun's own personal race. However, in "To His Coy Mistress," Marvell speaks of the race of the lovers against the rise and fall of the sun themselves. Time is a part of our lives that we never have enough of; it constantly speeds us up or slows us down. Both poems go into great depth over the struggle of time. It is not only important to "seize the day", but to also not take life for granted because life is not promised to any of us. ...read more.