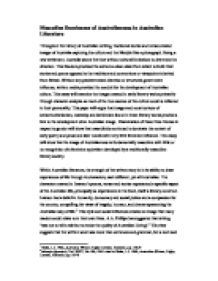 Masculine Dominance of Australianness in Australian Literature Throughout the history of Australian writing, traditional stories and verses created images of Australia capturing the culture and the lifestyle like a photograph. Being a new settlement, Australia was at the time without cultural limitations to determine its direction. This freedom provided the authors a clean slate from which to build their stories and poems opposed to the traditions and conventions or viewpoints inherited from Britain. Without any predetermined direction or structured government influence, written media provided the conduit for the development of Australian culture. This essay will examine the images created in early literary works primarily through character analysis as much of the true essence of the culture could is reflected in their personality. This paper will argue that images and constructions of antiauthoritarianism, mateship and larrikinism found in these literary works provide a link to the development of an Australian image. Examination of these three themes in respect to gender will show that masculinity continued to dominate the context of early poetry and prose and later novels with very little feminine influence. This essay will show that the image of Australianness is fundamentally masculine with little or no recognition of a feminine equivalent developed by a traditionally masculine literary society. ...read more.

Poems often tell the story of men and their mates; any mention of women in these works often relates to a sexual interest or is a derogative passing comment. When women are included as characters in these works, they are often presented only in association to the male character of the story as occurs for example in Squeakers Mate12 by Barbara Baynton. Here the female character is not referred to by name but rather is identified as the main characters mate throughout the story. Mateship is a virtue found in most images of Australia it is the blood running through the veins of Australianness. Kylie Tennant's novel The Battlers13, tells a story of Swagmen and workers forced to leave home and travel the road to find work. Tennant's main characters, Snow and Dancy, are unlikely partners, drawn together through necessity to survive and the persistence of misfortune. Whilst on the road, they find companionship and loyalty, and most of all mateship, the essence of Australianness. It was a dream of those who existed in undesirable conditions of the city, to live a better life somewhere else as depicted in Paterson's Clancy of the Overflow14. ...read more.