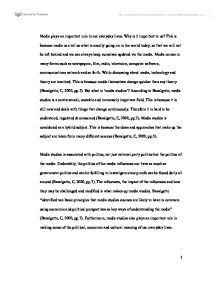 Media plays an important role in our everyday lives. Why is it important to us?

Media plays an important role in our everyday lives. Why is it important to us? This is because media can tell us what is exactly going on in the world today, so that we will not be left behind and we can always keep ourselves updated via the media. Media comes in many forms such as newspapers, film, radio, television, computer software, communications network and so forth. While discussing about media, technology and theory are involved. This is because media themselves change quicker than any theory (Bazalgatte, C, 2000, pp.5). But what is 'media studies'? According to Bazalgette, media studies is a controversial, unstable and immensely important field. This is because it is still new and deals with things that change continuously. Therefore it is hard to be understood, regulated & consumed (Bazalgatte, C, 2000, pp.2). Media studies is considered as a hybrid subject. This is because the ideas and approaches that make up the subject are taken from many different sources (Bazalgatte, C, 2000, pp.3). Media studies is associated with politics, not just national party politics but the politics of the media. Undeniably, the politics of the media influences our lives as much as government politics and can be fulfilling to investigate since proofs can be found daily all around (Bazalgatte, C, 2000, pp.7). ...read more.

By the 1980s, the widespread theoretical orientation in media studies had arisen. "In its simplest formulation, this view argues that the media induce 'false consciousness' through diversion and misinformation, so that the working class never realizes the historical destiny which Marx predicted for it - namely, to unite and overthrown capitalism. That is, media audiences are seen as 'cultural dopes' (Garfinkel 1967) who absorb the ideological messages present in all media contents which induce them to believe that capitalism is both desirable and inevitable, and that they should accept their place within it" (Sinclair, J, 2002, pp.15). This clearly shows that people are easy to be influenced by the media, and that is why they believe in capitalism. Besides, media is actually propaganda. People are easily to believe and get influenced about what it shows through the media without thinking twice. For examples, CNN (Cable News Network in US), BBC (British Broadcasting Corporation) and so on. The news that broadcasted in CNN about the Terrorism of September eleventh in New York was making the people around the world worried about their safety. People did not think twice about whether it was the real situation or not, they just believe it. Obviously, this shows that people are the 'cultural dopes'. ...read more.

Although the mediated materials do benefit to the self, but there are some negative consequences to it. Firstly, the ideological material is intruding the self via the use of media. This ideological material has the dominant formation and will control and maintain the symbolic forms. However, this may influence the individual on creating their self-identity (Thompson, J.B., 1995, pp.26). Secondly, it is the double-bind of mediated dependency. The self grows dependent to the media as a source for self-identity. The self is now under the circumstance where individual begins to be very dependent and not rely on this media system (Thompson, J.B., 1995, pp.27). Thirdly, it is the disorientating effect of symbolic overload. It means that the self will never be encountered with only one narrative material for self-formation and not only one mediated material to the view of the outside world (Thompson, J.B., 1995, pp.28). Finally, it is the absorption of self in mediated quasi-interaction. It means the individual depends very much on the mediated materials for constructing the self-identity (Thompson, J.B., 1995, pp.30). Undeniably, media is easily influences and affects our cultural meaning of daily lives. It affects the changes of our identities and behaviors such as the way we dress, the way we think, the way we communicate, so on and so forth. In conclusion, media studies do plays an important role in making sense of the political, economic and cultural meaning of our everyday life. 1 ...read more.