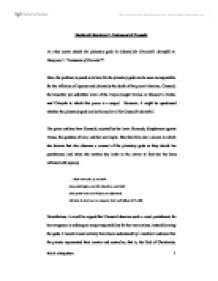 Medieval Literature 2: Testament of Cresseid To what extent should the planetary gods be blamed for Cresseid's downfall in Henryson's "Testament of Cresseid"? Here, the problem is posed as to how far the planetary gods can be seen as responsible for the infliction of leprosy and ultimately the death of the poem's heroine, Cresseid, the beautiful yet unfaithful lover of the Trojan knight Troilus in Chaucer's Troilus and Criseyde to which this poem is a sequel. However, it might be questioned whether the planetary gods can be blamed at all for Cresseid's downfall. The poem outlines how Cresseid, rejected by her lover Diomede, blasphemes against Venus, the goddess of love, and her son Cupid. She then falls into a swoon in which she dreams that she observes a counsel of the planetary gods as they decide her punishment, and when she awakes she looks in the mirror to find she has been inflicted with leprosy: . . . than rais scho vp and tuik Ane poleist glas, and hir schaddow culd luik; And quhen scho saw hir face sa deformait, Gif scho in hart was wa aneuch, God wait! (lines 347-350) Nevertheless, it could be argued that Cresseid deserves such a cruel punishment for her arrogance in refusing to accept responsibility for her own actions, instead blaming the gods; it would almost certainly have been understood by a medieval audience that the planets represented their creator and controller; that is, the God of Christianity. ...read more.

It is not necessarily the case that the persona of the narrator is equivalent to that of the poet, just as Chaucer's narrator differs from the poet himself in The Canterbury Tales. The narrator of the Testament might rather be seen as a parallel to the heroine; he describes himself as a servant of Venus, yet he is now too old and impotent to enjoy the physical act of love. Like Cresseid at the start of the poem, he is superficial and materialistic, equating love with lust just as Cresseid does. His pity for Cresseid rests on her misfortune in losing her good looks and physical comforts. However, while the character of Cresseid changes and develops throughout the poem, the narrator does not, and in the later part of the poem he disappears, ceasing to make personal comments on Cresseid's misfortune. It can be observed, therefore, that the narrator is not an accurate representation of the poet but rather a device; his outcry against the gods can be interpreted as an ironic statement to emphasise the foolishness and superficiality of both Cresseid and the narrator, in which case the poet can be viewed as condemning Cresseid and condoning the judgment of the gods. However, it is my opinion that the narrator serves as a point of contrast; by paralleling him with Cresseid at the start of the poem, the author further emphasises the change in her character and values by the time of her death at the poem's conclusion. ...read more.

looks, her comfortable home and nice food, the lack of which she bemoans on first entering the leper-house - she eventually comes to recognise the transience and triviality of these things, just as Troilus does after his death at the end of Chaucer's poem, and achieves a greater understanding of Self. Her rejection of material things at the poem's conclusion can be observed through her actions - her generosity in her will, for example - and also through her words as she acknowledges the virtue of her Troilus, her spurned lover; she sets herself up as an example to Trojan and Greek women where before she would not acknowledge her identity, shamed into going in secret to her father's house after her rejection by Diomede and later to the leper-house; and finally accepts what before she could not, her own responsibility for what has happened. She ends by making peace with the gods, commending her soul to Diana, the goddess of chastity: My spreit I leif to Diane, quhair scho dwellis, To walk with hir in waist woddis and wellsi. (lines 587-588) I would argue, therefore, that no blame can be placed on the gods for what in the true sense of the word can be called Cresseid's downfall - that is, her moral decline - since it happened before their interference. Rather, though their punishment of her with leprosy at first seems harsh, the gods are ultimately responsible, through this same punishment, for implementing Cresseid's redemption. ...read more.