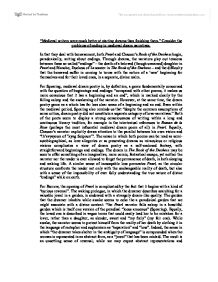 &quot;Medieval writers were much better at starting dreams than finishing them.&quot; Consider the problems of ending in medieval dream narratives.

"Medieval writers were much better at starting dreams than finishing them." Consider the problems of ending in medieval dream narratives. In that they deal with bereavement, both Pearl and Chaucer's Book of the Duchess begin, paradoxically, writing about endings. Through dreams, the narrators play out tensions between these so-called "endings" - the death of a beloved (though unnamed) daughter in Pearl and Blanche, Duchess of Lancaster in The Book of the Duchess - and the difficulty that the bereaved suffer in coming to terms with the notion of a 'new' beginning for themselves and for their loved ones, in a separate, divine realm. For Spearing, medieval dream poetry is, by definition, a genre fundamentally concerned with the question of beginnings and endings: "compared with other poems, it makes us more conscious that it has a beginning and an end", which is marked clearly by the falling asleep and the awakening of the narrator. However, at the same time, the dream poetry genre as a whole has far less clear sense of a beginning and an end. Even within the medieval period, Spearing also reminds us that "despite the common assumptions of some critics, dream poetry did not constitute a separate category of love-narratives." Both of the poets seem to display a strong consciousness of writing within a long and continuous literary tradition, for example in the intertextual references to Roman de la Rose (perhaps the most influential medieval dream poem of all) ...read more.

However, each step that he takes in the dream seems to bring him further from the objects of his desire. This sense of distancing and limitation is manifested in the physical symbol of the river itself that separates the dreamer from heaven. The poet plays upon the dual meaning of the word "deuyse" to illustrate the way in which the dreamer's separation works on many different levels: "what separates the dreamer from heaven is not so much space as a different mode of being...it represents an ontological rather than spatial divide." Even when the dreamer is allowed an insight into the heavenly city, this occurs at a distance. Putter comments upon how the descriptions: "is not intended - as it is in its biblical source - to herald man's permanent absorption into the kingdom of God, but to underline his continued exclusion from it" (there is, for example, no mention of the second coming in Pearl). Equally, the maiden demonstrates an emotional distance from her father, speaking in a lofty tone of reprimand rather than affection: "Sir, ye haf your tale mysetente...". It seems that the culmination of this quest to understand and bridge the spatial, emotional and symbolic gap between the two realms - as the dreamer dashes into the water - only serves to emphasise the impossibility of his aim. For many critics, this abrupt end to the dream is often seen as rather "disappointing" (Burrow). ...read more.

that can be traced back to formal classical thought, but also as a mode of thinking that distinguishes us as humans (reminiscent of the Cartesian: "I think therefore I am"). It seems that, even at the end of Pearl, neither the dreamer, nor the reader, can escape these "doubts" about the limitation of human understanding. For Putter: "the dreamer in Pearl always remains an outsider". There is a sense of this exteriority in the symbolic river that forces the dreamer to remain outside of heaven and in the manner in which he cannot enter into a full understanding of the paradoxical transcendental truths of heaven. Even the structure of the poem itself is characterised by a kind of rigid restriction, yet as Borroff writes: "In Pearl we see the poet offering up his craft, creating an expressive power out of the very restrictions imposed upon expression". It seems that in the complex ending of Pearl, the poet pushes boundaries of human understanding by revealing its limitations. At the beginning of the poem, the dreamer faces a personal, emotional crisis of bereavement but also poses fundamental theological and philosophical questions. At the end, when the poem has come full circle, the narrator is forced to confront the futility of his search to possess his pearl (literal and metaphorical), but also with the wider, fundamentally unanswerable nature of the questions that he seeks to answer. The unresolved, circular and opaque (even pearl-like) "problems" of the ending are in fact perhaps the most striking quality of the entire poem. ...read more.