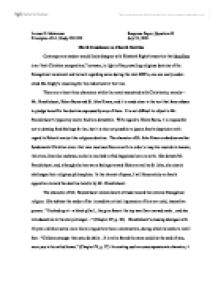 Loresa D. Matarazzo Response Paper, Question #3 Principles of Lit. Study 350:220 July 21, 2004 Moral Conscience vs. Church Doctrine Contemporary readers would likely disagree with Elizabeth Rigby's assertion that Jane Eyre is an "anti-Christian composition;" however, in light of the prevailing religious doctrine of the Evangelical movement and turmoil regarding same during the mid-1800's, one can easily under-stand Ms. Rigby's reasoning for this indictment at the time. There are at least three characters within the novel associated with Christianity; namely-Mr. Brocklehurst, Helen Burns and St. John Rivers, and it is made clear in the text that Jane refuses to pledge herself to the doctrine espoused by any of them. It is not difficult to object to Mr. Brocklehurst's hypocrisy and to find him detestable. With regard to Helen Burns, it is impossible not to develop fond feelings for her, but it is also not possible to ignore Jane's skepticism with regard to Helen's martyr-like religious doctrine. ...read more.

(Chapter IV, p. 26). Brocklehurst's ensuing dialogue with 10-year-old Jane seems more like an inquisition than a conversation, during which he seeks to instill fear: "Children younger than you die daily...It is to be feared the same could not be said of you, were you to be called hence." (Chapter IV, p. 27) In creating such an uncompassionate character, it is clear that Bronte sought to expose the oppressive nature of the Evangelical religion. Bronte also confronted the harsh and hypocritical nature of such a religion as respects the preaching of self-denial and suffering in the name of God. She exposes what she feels to be un-Christian behavior done in the name of Christianity. The cruel, abusive nature of such extremism is shown when Brocklehurst chastises Miss Temple for giving the Lowood students bread and cheese to substitute for the inedible porridge. ...read more.

In this way, Bronte accuses this type of "Christianity" of being hypocritical and of precluding genuine spirituality as well as equality. Throughout Jane Eyre, Bronte concerns herself with how the 19th century popular Evangeli-cal doctrine serves to endorse cruel, unjust behavior (and in the form of St. John Rivers and Helen Burns, how it restricts Jane's freedom). Her direct opposition to these forms of "Christianity" is shown in Jane's rejection of each of their doctrines. Bronte thus binds Jane to none of the Christian doctrines advocated by these characters, but instead leaves her to balance her faith in God with her own moral conscience. Therefore, especially in light of the prevailing low social status of women, this could have easily deemed Jane Eyre to have been shocking and revolutionary as well as anti-Christian to some of its initial readers (likely of a high social class.) ?? ?? ?? ?? 2 ...read more.