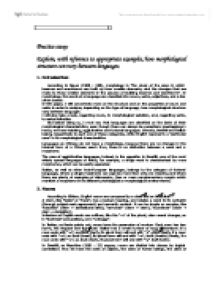 Explain, with reference to appropriate examples, how morphological structure can vary between languages.

According to Bauer (1988 : 248), morphology is “the study of the ways in which lexemes and word-forms are built up from smaller elements, and the changes that are made to those smaller elements in the process of building lexemes and word-forms”. In morphology, the words of a language are classified into nouns, verbs, adjectives, and a few other classes.

In this paper, I will concentrate more on the structure and on the properties of nouns and verbs in order to analyse, depending on the type of language, how morphological structure vary between languages.

I will also take a look, regarding nouns, to morphological variation, and, regarding verbs, to verbal inflection.

But before doing so, I must say that languages are classified on the basis of their morphological characteristics, even though there can always be exceptions [overlappings]: hence, we have isolating, agglutinative and fusional languages. Chinese, Swahili and Italian belong respectively to each one of these categories, while English represents a “particular case” in its morphological characteristics.

Languages as Chinese do not have a morphology, because there are no changes in the internal form of a Chinese word: thus, there is no distinction between a word and a morpheme.

The case of agglutinative languages, instead, is the opposite: in Swahili, one of the most widely spread languages of Africa, for example, a single word is characterized by more morphemes, which can be easily separated.

Italian, as well as other Indo-European languages, belongs to the category of fusional languages, where a single morpheme can express more than only one meaning and where there are plenty of examples of allomorphs, (two or more complementary morphs which manifest a morpheme in its different phonological or morphological environments).

According to Gibbon, English nouns are composed by a stem and an inflection.

Inflexions of English words are suffixes, like the “–s” of the plural, stem vowel changes, as in “foot-feet” and prefixes, as in “unhappy”.

In Swahili, as Myachina (1981 : 22) argues, nouns are divided into classes by logical correlation: thus we have the class of objects, the class of human beings, the class of animals, the class of trees; a class can be also determined by mutual relationship of two objects in space. Swahili has altogether 15 classes. Each class has a different set of prefixes for marking numbers (singular and plural), e.g., mtoto "child", watoto "children".

It must be said that only root words and bound words may be stems and word heads, while only root words may stand alone as free words. In the category of affixes, we can distinguish between word-forming affixes (which may be heads as well), as “wú-” 无 (not) and grammatical affixes, as “-men” 们, the plural affix.

Languages which are characterised by morphophonemic alternation show variations in the phonemic and/or morphological shape of their morphemes, showing the presence of allomorphs.

For example, both English and Italian have this characteristic: nevertheless, while in English examples of this type are less common, in Italian are much more common. In English examples are the plurals “-es” and “-s” as in buses /iz/ or girls /z/; the plural of “-f”, which is “-ves”, as in “wives”; in Italian many examples can be taken from nouns like psicologo /psi’kolo:go/ (psychologist), which assumes different shapes depending on the context. Thus, we find psicologi /psi’colodЗI/ (psychologists), psicologico /psiko’lodЗi:ko/ (psychologic), or psicologia /psikolo’dЗIa/ (psychology), where the lexical morpheme /g/ becomes /dЗ/. Another example can be also taken from the adjective b[‘ε]llo (beautiful) and b[e]llino (fairly beautiful), where the difference between the two vowels is justified by phonological reasons.

Morphophonemic alternation in Swahili is due mainly to palatalisation and labialisation. Palatalisation of consonants arises where the high front vowel i is present. Thus, in a variety of Swahili suffixes we can find the shift n > m before labials, e.g. n + -buzi > mbuzi; or the shift k > ch /t∫/ before i + a, as in ki + angu > changu.

In Chinese, it is easy to deduct that there is no morphophonemic alternation, since every morpheme is isolated and there is no grammatical agreement.

However, this does not mean that in Chinese grammatical values and functions do not exist in Mandarin: as Bauer (1988 : 131) points out, there is a set of grammatical morphemes in Mandarin with serves to mark nouns with grammatical cases, as bèi 被for the nominative or agentive.

English verbal inflection is not that rich: in fact, for almost all verbs, there is only one change, adding -s or -es for third person singular, only in the Present Tense: “He listens”. All other persons require no changes to the verb: “I dream”, “You dream”, “We dream”, and “They dream”.

In Italian, the situation is rather different: verbs are inflected in mode, tense, number, and person, so we have different forms for each person. An example may be the Indicative present tense of the verb mangiare (to eat): io mangio (I eat), tu mangi (you eat), egli mangia (he eats), noi mangiamo (we eat), voi mangiate (you eat), essi mangiano (they eat).

Besides, as an example of fusional language, a single Italian morpheme can encode various meanings: take a look at the 3rd person singular Past Tense of the verb amare (to love), amò: this verb encodes the 3rd person, the singular, the Past, the Indicative and the Active form at the same time.

Regarding Swahili verbal system, Myachina (1981 : 46) argues that the Swahili verb consists of more elements, as: a significant verbal base; preverbal concords in agreement with the class of the subject and the object; and tense, aspect and modal markers. An example can be mwanafunzi anasoma kitabu (the pupil reads the book), where “a-” is the subject concord of the 3rd person singular, agreeing with the class 1 noun mwanafunzi, “-na-” is the Present Tense marker, and “–soma” (to read) is the significant verbal base. In Swahili, every morpheme can be easy separated: an agglutinative language is easily recognizable by this characteristic.

In isolating languages as Chinese, word order and particles shape the syntax and the meaning of the words, what inflection does in agglutinative and fusional languages.

Chinese verbal system, in fact, lacks verbal inflection, since its verbs do not change form, relying on word order, context or some kinds of morphemes to convey meaning: I will go is simply literally translated into “tomorrow (it depends on the speaker) I go”,ming tian wo jiang hui qu 明天我将会去 or “I bought a book” is translated with mai le yi ben shu 买了一本书, where the morpheme le is the Past Tense marker.

In Chinese, it is possible to divide words into morphemes, while in English it can create ambiguity (Bauer : 130): for instance, the denotations of “know”in knowing a person, a proposition, and a language are sufficiently different that they can be translated into three different verbs in other languages. This is the reason for which English cannot be classified as a fusional or an isolating language, as it shares sometimes some properties with the former and sometimes with the latter.

The knowledge we have about our native language is innate in everyone of us: therefore, find and give explanations is not that simple, and this is why many research and studies have been made in order to understand rules that make languages.

Furthermore, in this paper I did not only talk about my mother language, Italian, but also about other three languages, two of them I have never studied before (Chinese and Swahili).

Ideally, the task of a morphological analysis system would be to break the word down to its component morphemes and determine the meaning of the resulting decomposition.

From this work I understood that foreigners’ language acquisition can be compared to children' language acquisition, since both are starting to learn the rules which make a language and, therefore, they have expectations. However, while English children try to apply the rules of English, foreigners who may not know them, tend to apply the rules of their own language: hence, we can hear a Chinese speaker saying “tomorrow I go” or a person who speaks Swahili saying “I eat it the apple”, putting 2 objects referring to the same argument.