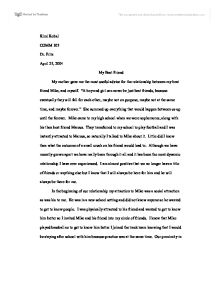 Kimi Kobal COMM 103 Dr. Fritz April 25, 2004 My Best Friend My mother gave me the most useful advice for the relationship between my best friend Mike, and myself. "A boy and girl can never be just best friends, because eventually they will fall for each other, maybe not on purpose, maybe not at the same time, and maybe forever." She summed up everything that would happen between us up until the forever. Mike came to my high school when we were sophomores, along with his then best friend Marcus. They transferred to my school to play football and I was instantly attracted to Marcus, so naturally I talked to Mike about it. Little did I know then what the outcome of a small crush on his friend would lead to. Although we have recently grown apart we have really been through it all and it has been the most dynamic relationship I have ever experienced. I am almost positive that we no longer have a title of friends or anything else but I know that I will always be here for him and he will always be there for me. In the beginning of our relationship my attraction to Mike was a social attraction as was his to me. He was in a new school setting and did not know anyone so he wanted to get to know people. ...read more.

He would take the smallest thing I said as a personal attack and it would spiral into a huge fight. A lot of hostile listening went on with both of us. We would listen carefully to what the other was saying just to pull out something to disagree with. If I would say something about liking something another boy did for his girlfriend he would come back with a "Well sorry I didn't do that, you know nothing is ever good enough for you." I was known for assumptive listening. Long before I left for school he had a crush on one of my old friends that I had a falling out with. It never bothered me before but all of the sudden I became more sensitive about it and anytime he mentioned her name I thought he was purposely trying to make me mad and I would take it as a personal attack and become extremely defensive. This caused about half the fights we got in toward the end of our relationship. Anytime he would be about to say something, I would jump in with a smart remark and not let him finish. If we were talking about me leaving, he would say something about wanting to see me before I left and I would say something about how it wasn't all my fault that I had to leave even if he wasn't going to even mention that. ...read more.

We have never held back from one another so I think a direct ending would be most likely. I think we would talk it out and come to the conclusion that we are fighting too much and agree that we need to just end it. Although both of us would be extremely hurt to have this conversation it would end in a negotiated farewell. Our words would be hostile because we are so alike and neither one of us would want to take or accept having the blame put on us but we would not want to blame the other either. I think it may have a positive tone ending because I know that we would both be dancing around the issue so one of our little misunderstandings would just end being the final straw. I am not sure what is to come of my relationship with Mike. I do know that no matter what happens, the way I feel about him will never change. He is my best friend and as far as I am concerned he will always be. Although it is hard sometimes to express how we really feel about each other I think we have a mutual agreement and understanding of each other. Another quote I've heard is "Everything is okay in the end and if it's not okay it's not the end." Since things are not okay right now I'm sure it is not the end. Hopefully when it does end everything will be okay. ...read more.