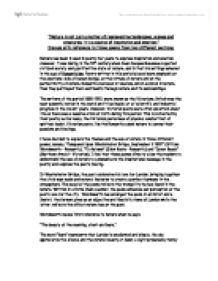 &quot;Nature is not just a matter of representing landscapes, scenes and creatures; it is a source of inspiration and emotion.&quot; Discuss with reference to three poems from two different sections.

"Nature is not just a matter of representing landscapes, scenes and creatures; it is a source of inspiration and emotion." Discuss with reference to three poems from two different sections. Nature has been in used in poetry for years to express inspiration and emotion. However, it was during in the 18th century when Jean Jacques Rousseau rejected civilized society and glorified the state of nature, and in that his writings ushered in the age of Romanticism. Poetry written in this period placed more emphasis on the emotional side of human beings, on the virtues of nature and on the perfectibility of nature. Romantics believed in idealism, which existed in nature, thus they portrayed their sentiments through nature and its surroundings. The writers of the period 1880-1901, were known as the Victorians. Britain was the most powerful nation in the world and it had made lot of scientific and industrial progress in the recent years. However, Victorian poets were often uncertain about life as there was a massive crisis of faith during this period. This is reflected by their poetry as for many, the Victorian period was of physical comfort but of spiritual doubt. Victorian poets, like the Romantics used nature to convey their passions and feelings. ...read more.

Next the poet moves on to paint a very rosy picture of the atmosphere: "All bright and glittering in the smokeless air." He has made use of very positive adjectives to describe the surroundings. This is a very idealistic view of the city. "Smokeless" is a very significant word to describe the air of London as during this time, the air could not be more polluted in London and similar industrial cities - a smokeless sky was a rather rare sight. "Bright and glittering" reflects the illumination of the atmosphere. Similarly, in the next couple of lines, Wordsworth goes on to portray the magnificence of the English sun: "Never did the sun more beautifully steep In this first splendour, valley, rock or hill. " An assault of colour hits the eyes and a feeling of warmth and security runs down the spine. The word "steep" intensifies the reader's sense of touch. Wordsworth not only wants one to take notice of the sunrise, he wants one to be absorbed by its warm rays and feel relaxed - taking a breath of fresh clean air. The words "rock", "hill" and "valley" are all linked to the nature, symbolises the importance of using nature in poetry as it makes us visualise the poem more clearly. ...read more.

The poet uses the most powerful of expressions to achieve effect; it is often associated with nature: "And fill all fruits with ripeness to the core, To swell the gourd, and plump the hazel shells" The adjectives such as "ripeness" and "plump" provide the reader with an excellent description of the landscape. The poem makes uses of gestures of full growth and nurturing and a lot of nature imagery. However, unlike "Westminster" the poet has only used nature as imagery not to express his emotions. In the next stanza, the poet makes use of onomatopoeic expression, alliteration with nature to signify the strength of the wind: "Thy hair soft-lilted by the winnowing-wind;" This use of language creates a rather humble and peaceful atmosphere for the reader. It emphasises the harmony of autumn and this effect, which is used often throughout the poem, could also be a metaphor for the slow down of life during autumn, and the imminent death of the season. In the next line, the poet makes use of a flower to emphasise the drowsiness of the poem: "Drowsed with the fume of poppies," Poppies are flowers used to make opium, which was a form of drugs experimented by poets during that time. The flower imagery here is used negatively to show the effects of taking drugs; drugs could bring one to the "Autumn" of one's life, nearer to death? ...read more.