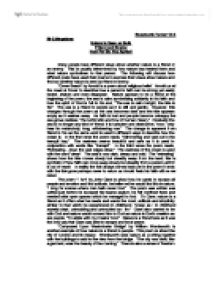 Nature is Seen as Both Friend and Enemy How Far Do You Agree?

Rosemarie Turner 12:2 Mr Livingstone Nature is Seen as Both Friend and Enemy How Far Do You Agree? Many people have different views about whether nature is a friend or an enemy. This is usually determined by how nature has treated them and what nature symbolises to that person. The following will discuss how different poets have used their poems to express their views about nature and find out whether nature is seen as friend or enemy. "Dover Beach" by Arnold is a poem about religious belief. Arnold used the coast at Dover to describe how a person's faith can be strong yet easily tested, shaken and even disappear. Nature appears to be a friend at the beginning of the poem, the sea is calm symbolising solidarity in his faith and how the spirit of God is full in his soul, "The sea is calm tonight, the tide is full." The sea is a friend to people as it is still and gentle. ...read more.

In reality the tide always comes back yet in the poem it ends with the tide gone perhaps never to return as Arnold feels his faith will never return. The poem "I Am" by John Clare is about how he wants to escape all people and emotion and find solitude, he believed he would find this in nature, "I long for scenes where man hath never trod." The poem was written was written just before he escaped his insane asylum, he felt confined there and needed wide open spaces which he managed to find. To Clare, nature is a friend as it offers what he needs and wants the most; solitude and simplicity similar to that which he experienced in childhood, "sleep as I in childhood sweetly slept, untroubling and untroubled as I lie." Clare also wanted to be with God and nature would connect him to God as nature is God's creation as are people, "To abide with my Creator God." ...read more.

Burns used the imagery of a red rose to symbolise his love, "O my luve's like a red, red rose." The rose appears to be initially a very good way to describe love as it is beautiful and natural; however, a rose has thorns which can hurt and is short lived. This suggests the love will not last and has hidden agendas as the rose hides its thorns until a person finds them by hurting themselves on them. Nature is an enemy here as it hurts people by deceiving them to think it is beautiful and harmless. In conclusion, nature can be seen as good or bad depending on the viewpoint of the poet. If nature has been influential in a good way, for example, Clare found safety and freedom in nature; they will have only positive views of nature. However, those who have had bad experiences, such as Arnold will not see nature as a friend. If nature is allowed to be free and is not completely confined nature will be a friend, when people try to go against it bad things occur and nature becomes the enemy. ...read more.