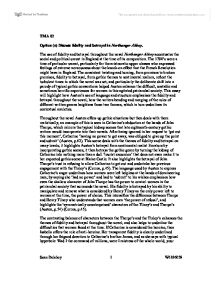 TMA 02 Option (a) Discuss fidelity and betrayal in Northanger Abbey. The use of fidelity and betrayal throughout the novel Northanger Abbey accentuates the social and political unrest in England at the time of its composition. The 1790's were a time of particular unrest, particularly for the aristocratic upper classes who expressed feelings of extreme nervousness about the knock-on effect that the French Revolution might have in England. The consistent twisting and turning, from promises to broken promises, fidelity to betrayal, from gothic themes to sentimental realism, reflect the turbulent times in which the novel was set; and particularly the deliberate shift into a parody of typical gothic conventions helped Austen enhance the difficult, unstable and sometimes horrific experiences for women in this agitated patriarchal society. This essay will highlight how Austen's use of language and structure emphasises the fidelity and betrayal throughout the novel; how the writers bending and merging of the rules of different written genres heightens these two themes, which in turn underlines its contextual anxieties. Throughout the novel Austen offers up gothic situations but then deals with them realistically; an example of this is seen in Catherine's abduction at the hands of John Thorpe, which mirrors the typical kidnap scenes that late eighteenth-century gothic writers would incorporate into their novels. ...read more.

Isabella's fickle friendships and emotions emphasise the tenuous gap between fidelity and betrayal that permeate throughout the novel. What they also highlight is the tenuous role that women had at the time of the novel, and the extremes that young women had to go through to achieve stability in a society governed by men. Her betrayal of James and by association of Catherine can be seen on the one hand as an act of ruthless cold-heartedness, but also as an act of survival. Her misconception of wealth that would be attained through a marriage to Morland, when realised provides a frightening future for a woman who is always expected in societies such as those found at Bath to look decent, fashionable and well respected. It is no surprise also that the role of Captain Tilney, who breaks both Isabella's engagement to James, as well as his own is played down in a patriarchal society. Henry's smooth discussion leads Catherine to reflect with the use of free indirect discourse that 'Frederick could not be unpardonably guilty, while Henry made himself so agreeable' (Austen, p.161). This acquiescence by Catherine can also be seen as a betrayal of Isabella, as instead of attempting to try and salvage some respect for her former friend's nature she allows the bonding defence of Henry's towards Frederick to overpower her and concedes to male dominance. ...read more.

This re-introduction of the gothic themes that plagued Catherine throughout her early stay at the Abbey are used to highlight that the reality of how she has been treated is far worse than any imagined murdered wife or any skeletons hiding in cupboards. The General's betrayal towards Catherine accentuates the power of men over women, and the gothic references highlight the severity of the real horrors that women had to face in a society that left them powerless to the cruelties of men's emotions. The comic scenes involving the chest and the cabinet in her bedroom at the Abbey can now almost be seen as metaphoric premonitions of the 'patriarchal violence and oppression of women' that she will face at the hands of the archetypal gothic villain portrayed by the General (Correa, p.59). By incorporating gothic themes into a novel that would be expected to involve a more sentimental realistic approach Austen is able to emphasise the unrest in England at the turn of the eighteenth-century caused by the threat of revolution. The many twists and turns in the plot, the private conversations such as those between Thorpe and the General that reveal false information, the delicate, imaginative and artificial circumstances that characters such as Isabella and Catherine find themselves in, the need to impress and express material wealth and knowledge all intensify the feelings of nervousness and unease that this society would have felt. ...read more.