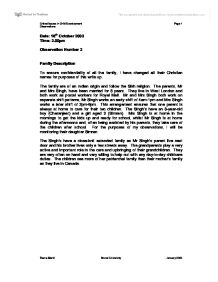 Date: 16th October 2003 Time: 2.00pm Observation Number 2 Family Description To ensure confidentiality of all the family, I have changed all their Christian names for purposes of this write up. The family are of an Indian origin and follow the Sikh religion. The parents, Mr and Mrs Singh, have been married for 8 years. They live in West London and both work as postal workers for Royal Mail. Mr and Mrs Singh both work on separate shift patterns, Mr Singh works an early shift of 4am-1pm and Mrs Singh works a later shift of 2pm-9pm. This arrangement ensures that one parent is always at home to care for their two children. The Singh's have an 8-year-old boy (Charanjeet) and a girl aged 3 (Simran). Mrs Singh is at home in the mornings to get the kids up and ready for school, whilst Mr Singh is at home during the afternoons and, often being assisted by his parents, they take care of the children after school. For the purposes of my observations, I will be monitoring their daughter Simran The Singh's have a close-knit extended family as Mr Singh's parent live next door and his brother lives only a few streets away. The grandparents play a very active and important role in the care and upbringing of their grandchildren. They are very often on hand and very willing to help out with any day-to-day childcare duties. The children see more of her patriarchal family than their mother's family as they live in Canada. Observation There were several people present at the time of the observation * Simran, 3 (the child I am observing) * Mr Singh, 30's (the father) * Mrs Singh, 30's (the mother) * Charanjeet, 8 (the brother) * Mrs Singh, 60's (the grandmother) I knocked on the door and was promptly greeted by the grandmother. She led me into the kitchen where Simran was reading a magazine on the kitchen table and her mother was busy preparing some food. ...read more.

Charanjeet appeared very angry with his mother for he was hitting her quite aggressively. Thought: I am taken aback by the ability of a three-year's understanding of violence and her ability to be protective over her mother. Mother, suddenly releasing the time, attempts to get up having remembered that she has to bring in the clothes that had been drying outside. Simran resisted her mother's attempts to leave and said "No mama! I want to sit here with you". Mother replied, "Beta you can come and help me'. So off they went. But then Simran disappeared upstairs for she had misunderstood her mother's instructions and, moments later, emerged from upstairs having brought down the clothes that needed washing. Mother noticed this as she brought in the washed clothes and, whilst affectionately kissing her on her head, explained to Simran that that was not what she had meant. Reflection This interaction with mother and daughter was very interesting, it was evidently clear that her relationship with her mother is much more about love and affection, this is in contrast to her relationship with her father. She displays a close attachment to her mother and often looks lost or hurt when mother leaves her alone or leaves the room for even the briefest of moments. This is in stark contrast to her behaviour and attitude towards her father whom, in the presence of her mother, she seems to largely ignore or not acknowledge. Simran spent much of the hour maintaining eye contact with mother and enjoyed being stimulated by her mothers company as she tried to continually engage Simran with various activities. She continually looked to her mother for her approval, praise and affection as if they were the most important things in the world to her. Likewise, the mother seemed very focused and attentative towards Simran and continually encouraged and praised what she was doing. ...read more.

Her attitude, he believes, caused immense problems when she tries to excerpt some discipline. The mother's view on the subject was that it was important for her to be somewhat more lenient and compassionate, as she wanted the children to feel at ease in their own home and not to be in fear to show affection. Feelings: I felt somewhat uncomfortable as the parents began a discussion on what I am observing and of their parenting skills. I tried to diffuse the situation by saying that I was not there to pass judgement on their parenting. Thought: But maybe she is being a bit too lenient, as I have now seen on several occasions both children physically hitting the mother in protest if she is attempting to be instil some discipline. Reflection Again the strong bond between the mother and the daughter has been clearly displayed. At times it appears so strong that they seem to exclude, ignore or even confront other members of the family. It is evident why Simran has this strong bond, as in this observation the mother appears reluctant to discipline her and is seen by Simran as the parent who is the soft touch who will cave into her demands a lot easier. Simran is very much aware of this and uses it to her full advantage. In contrast, she views her father as the one who she has to obey without question, as he is the parent that she cannot influence or get around easily. Also during this observation, it was evident that Simran plays up in front of her mother. She acts very clingy and wants to have all the attention from her mother. She displays behaviour that is not too dissimilar from a child who is much younger than her. This is in contrast to the behaviour she displays in the presence of her father, during which she acts very independent for her age and displays minimal interaction with her father. Critical Issues in Child Development Page 1 Observations Teena Mand Brunel University January 2004 ...read more.