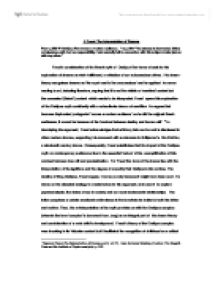 Oedipus and Freud. In exploring Sophocles tragedy, Freud creates his own myth expanding on this through his theory that the origins of the legend of Oedipus lie in primeval dream-material.

1. Freud, The Interpretation of Dreams From p.262 "If Oedipus Rex moves a modern audience..." to p.264 "The attempt to harmonize divine omnipotence with human responsibility must naturally fail in connection with this subject-matter just as with any other." Freud's consideration of the Greek myth of Oedipus Rex forms a basis for his exploration of dreams as wish-fulfillment, a reflection of our subconscious drives. His dream-theory recognises dreams as 'the royal road to the unconscious' and he applies the same reading to art, including literature, arguing that it is not the visible or 'manifest' content but the concealed ('latent') content which needs to be interpreted. Freud opens this exploration of the Oedipus myth confidently with a subordinate clause of condition. He argues that because Sophocles' protagonist 'moves a modern audience' as he did the original Greek audiences, it cannot be because of the 'contrast between destiny and human will.'1 In developing his argument, Freud acknowledges that arbitrary fate can be and is dismissed in other modern dramas, supporting his comment with a reference to Grillparzer's Die Ahnfrau, a nineteenth century drama. ...read more.

Freud affirms that an interpretation of dreams reveals the same sexual impulse for our mother and hatred of our father that is dramatized in Sophocles' version: "It is the fate of all of us, perhaps, to direct our first sexual impulse towards our mother and our first hatred and our first murderous wish against our father."2 The shocking conclusion that Freud draws from his interpretation of the Oedipus myth is tempered only slightly with the adverbial, 'perhaps'. For Freud it is the audience's realisation that they share in these desires which contributes to the play's success. He extends his comments to encompass the poet to whom he gives a didactic intent. For Freud, the poet's representation of Oedipus's guilt forces us to explore the suppression of such taboo impulses as incest and parricide (which in terms of the myth is also regicide) in ourselves. Thus, he challenges us with the quotation from the antithetical comments of the concluding Chorus. ...read more.

The reaction of the imagination to the two typical dreams gave rise to the contemporary myth. From his argument, Freud promotes the concept of universal determinism, refuting any harmony between divine will and man's autonomy. In exploring Sophocles' tragedy, Freud creates his own myth expanding on this through his theory that the origins of the legend of Oedipus lie in primeval dream-material. Freud establishes the key aspects of the Oedipus myth within the psychoanalytical framework of desire and repression but it is the action of the play proper which he compares to the process of psycho analysis. While the legend of Oedipus is powerful, it is Freud's recognition of it as a primal myth and his interpretation which has led to its dominance today. In so doing he foregrounds the idea of myth and facilitates the dominance of myths in contemporary society while the context of classical myths strengthens the reception of his theories. While the simplicity of his premise has often been criticized, his argument still has influence on twentieth century thought. ...read more.