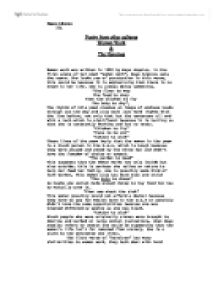 Oetry from other cultures - Woman Work &amp; The Heroines.

Poetry from other cultures Woman Work & The Heroines Women work was written in 1928 by Maya Angelou. In the first scene of her poem "women work", Maya Angelou sets the scene. She lacks use of punctuation in this verse, this could be because it is emphasising that there is no break in her life. She is always doing something. "The floor to mop The food to shop Then the chicken to fry The baby to dry", The rhythm of this poem creates an image of endless tasks through out the day and also each last word rhymes with the line before, not only that but the sentences all end with a verb which is significant because it is telling us that she is constantly working and has no rests. "Chicken to fry" "Cane to be cut" "Cotton to pick" These lines of the poem imply that the woman in the poem is a black person in the U.S.A, which is tough because they were abused and owned by the white man and didn't have the freedom of choice or speech. "The garden to weed" This suggests that the woman works not only inside but also outside, this is perhaps she relies on nature to help her feed her family, she is possibly some kind of farm worker, ...read more.

There are no rhyming couplets, also the poet uses commas to suggest some breathing space to the pace of the poem. The first words in each line of this verse is almost like a command, she has to rely on nature to cool her down as she works, "Shine on me, Shine Rain on me, Rain Fall softly, dewdrops And cool my brow again" The last line of the second verse ends with again, which means that this has happened to her before in her life and relies on nature to cool her down and make her work easier. This sets the atmosphere of a hot dry day. The second verse of Heroines starts with personification and simile, "The hill tops creep away like children playing games Our other children shriek against the school yard rails" This means that as they get closer to the hill tops (completing their chores) there are always more chores to do so it seems that they will never get to the top, this creates a picture of women working non stop and never reach their true potential in life. Also, in this verse the women become stereotyped in the lines "There's Mandy's mum, John's mum, Dave's mum, Kate's mum, Cerie's mother and Tracey's mummy" They have lost their individuality and only seen as ...read more.

Final verse describes the natural beauties of this world, "Sun rain, curving sky Mountain, oceans, leaf and stone Star shine, moon glow You're all that I can call my own." Natures beauties can be shared by those who live the existence of a slave but this does create a picture of sadness for the reader because she worked hard all her life and to pass away not being able to accomplish anything is a very upsetting and depressing moment. The third verse of Heroines continues to give the reader more examples of the daily chores faced by the women, they have to look after the house aswell as the family. Repetition in the last line probably shows hat they do this every day. This poem shows a better life for the women than the women in "women work" because there is food available and they are proud of their homes and try to keep them tidy. "after lunch, more bread and butter, tea" "And do the house and scrub the porch and sweep the street" Out of the two poems I prefer women work because it had more feeling and I enjoyed reading it, I could really see what Maya Angelou was trying to tell the world, I also like the rhythm of the poem and the continuos repetition in the first verse. Husam Alkarnaz 11L ...read more.