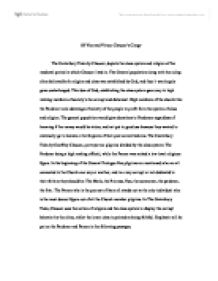 Of Vice and Virtue: Chaucer's Clergy

Of Vice and Virtue: Chaucer's Clergy The Canterbury Tales by Chaucer, depicts the class system and religion of the medieval period in which Chaucer lived in. The General population along with the ruling elites believed both religion and class was established by God, and thus it was largely gone unchallenged. This idea of God, establishing the class system gave way to high ranking members of society to be corrupt and dishonest. High members of the church like the Pardoner took advantage of naivety of the people to profit from the system of class and religion. The general population would give donations to Pardoners regardless of knowing if the money would be stolen, and not put to good use because they wanted to eventually go to heaven or be forgiven of their past committed sins. The Canterbury Tales by Geoffrey Chaucer, portrays two pilgrims divided by the class system: The Pardoner being a high ranking official, while the Parson was ranked a low level religious figure. In the beginning of the General Prologue five pilgrims are mentioned who are all connected to the Church one way or another, and in a way corrupt or not dedicated to their faith as they should be: The Monk, the Prioress, Nun, the summoner, the pardoner, the friar. The Parson who is the poorest of them all stands out as the only individual who is the most devout figure out of all the Church member pilgrims. In The Canterbury Tales, Chaucer uses the notion of religion and the class system to display the corrupt behavior by the elites, whilst the lower class is painted as being faithful. Emphasis will be put on the Pardoner and Parson in the following passages. The Pardoner status in the Church is a well respected position, consequently giving more power at his disposal equaling in higher access to wealth. The Pardoner takes advantage of the pilgrims, by tricking them into believing that the random items he has in his possession are actually "relics" from dead holy saints. ...read more.

He lets them touch these relics only after they have paid him a handsome sum of money, subsequently obtaining "a day he gat him more money than that the person gat in months twaye" (pg 187 line 705). The Pardoner tells a story with the underlying message of avarice being the root of all evil "goode men and wommen oo thing warne I you: if any wight be in this chriche now that hath doon sinne horrible, that he darn at for shame of it yishen"( Pg 237 Line 89), yet he himself, hypocritically, is an extremely avaricious man who attempts to cheat money off of the pilgrims by selling them fake relics. However, it is rather ironic that the Pardoner confesses in a rather relaxed way he is a fraud "Thus can I preche again that same vice which that I use, and that is avarice" (Pg 238 Line 140). The Pardoner's job is one that is known for its corruption and abuse of powers "but shortly myn entente I wol devise; I preach of no thing but for conveitise; therefore my theme is yit and evere was...." ( Pg 238 Line 135). The Pardoner certainly knows the powers bestowed upon him but, is not worried about being confronted over his unfaithfulness towards the people "But though myself be guilty in that sinne, Yit I can make other folk to twinne From avarice, and sore to repente" (Pg 238 Line 141). From these described scenarios the Pardoner can be considered a bold, greedy and cunning con artist who preaches against sins of deceit and avarice, yet practices both of them. The sole righteous member of the religious pilgrims is the Parson. The Parson actually practices what he preaches and forgives in the name of Christ, not for monetary purposes. He forgives all who seek his services, never placing himself above anyone else, and only seeks to fulfill his responsibilities to the Church. ...read more.

He is furthermore said to have been very poor, yet he is identified as being "riche he was of holy thought and werk"(Pg 182 Line 481). The Parson is the only holy pilgrim that is said to be poor. He is devoted to God and his congregation, and as a true clergyman, the Parson represents that part of the church that is not corrupt "But in his teching discreet and benigne, To drawn folk to hevene by fairnesse"(Pg 183 Line 520). The Parson sticks out like a parasite in the prologue, because of his virtuous life. It says in Chaucer prologue that he despises collecting taxes, which is the income on which he lives. Rather, the Parson gives his own belongings to the community instead of taking " unto his poore parisshens aboute Of his offring and eek of his substance" (Pg 182 Line 491). Unlike the other church officials, he is honest and devout to the church, which in a way makes him an outside or a parasite because of his good all round behavior. It is also said in the prologue to The Canterbury Tales that the Parson also practices what he preaches.. The Parson, is a prime example of what a clergyman should be. He practices what he preaches and is virtuous in all ways. The Parson represents what society should be, and the other clergy represent what most of society is. Chaucer obviously likes the Parson through his statements about him in the Parson's introduction. and the fact that the Parson is one of the few that have not yet abused their power, and he applauds the Parson for doing so. " A bettre preest I trowe ther nowher noon is'' (Pg 183 Line 526). In conclusion Chaucer shows through these two pilgrims what was wrong with the church and society in 14th Century medieval era. It is evident that money and power dictated faith in the medieval era. Officials with power tended to be corrupt whilst low level members of the church appeared to be honorable. ...read more.