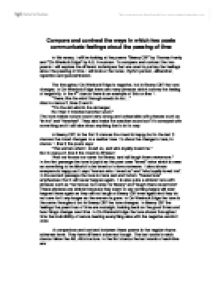 Compare and contrast the ways in which two poets communicate feelings about the passing of time In this essay, I will be looking at the poems "Beeny Cliff" by Thomas Hardy and "On Wenlock Edge" by A.E. Housman. To compare and contrast the two poems I will explore the different techniques that are used to portray the feelings about the passing of time. I will look at the tones, rhythm pattern, alliteration, repetition and personification. The throughout On Wenlock Edge is negative, but in Beeny Cliff the tone changes. In On Wenlock Edge there are many phrases which convey the feeling of negativity. In the 4th stanza there is an example of this on line 1: "There, like the wind through woods in riot..." Also in stanza 2, lines 3 and 4: "'Tis the old wind in the old anger, But then it threshed another wood." The tone makes nature sound very strong and unbeatable with phrases such as "in riot" and "threshed". They also make the weather sound as if it's annoyed with something and it will take down anything that is in its way. In Beeny Cliff, in the first 2 stanzas the mood is happy but in the last 3 stanzas the mood changes to a sadder tone. ...read more.

Beeny Cliff seems more like a song as the last word in each line of a stanza rhyme. But in On Wenlock Edge the AB AB rhyme scheme makes it sound more like a story. But with both poems the rhyme is flowing and makes it easier to read. The rhyming in both poems show that time is constant and never stops. Both poems use alliteration to draw attention to particular phrases. In On Wenlock Edge it uses alliteration twice: "'Twould blow like this through holt and hanger" "...Heaving hill" In Beeny Cliff in stanza 1 on the last line the alliteration phrase it uses is: "...loyally loved" In stanza 5 on the first line the phrase it uses is: "...wild weird western shore" In On Wenlock Edge both uses of alliteration use "H" which is a harsh sounding letter and it emphasizes phrases which show the ruthlessness of nature. It also says "'Twould" which mean the wind will blow through it. "Heaving" sounds crowded and heavy as if nature is heavier than anything else. In Beeny Cliff "loyally loved" emphasizes love more with "l" which is very soft-sounding. But the phrase also sounds like something in the past that was true but is no longer true. ...read more.

The use of the words "trouble" and "heaves" sound as though the woods are becoming tired. In Beeny Cliff the waves seem to be happy and flowing at the time as they are "engrossed in saying their ceaseless babbling say." Later on, however, the feelings about nature change. The cliff's personification is not as happy. The cliff seems lonely as no one "cares" for it. Personification in both poems portrays feelings about different things in nature. In conclusion, both poems use similar techniques to portray the feelings in each one. The poems are different in what they are trying to convey yet the similar methods seem to be suitable in both cases. On Wenlock Edge is telling the story of nature's long battle with man and its destructive manner. The uses of alliteration, repetition and tone help show how over a long period of time nature wins its battles. In Beeny Cliff the poem is told through the eyes of a man whose mood changes in the poem. At the beginning he is happy and contented but by the end he is sadder and shows the change over a short amount of time. Both poems convey negative feelings with their tones. On Wenlock Edge and Beeny Cliff use nature mainly to describe feelings and time but On Wenlock Edge shows the everlasting way of nature while Beeny Cliff uses nature to portray people's feelings. ...read more.