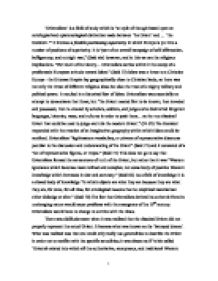 'Orientalism' is a field of study which is "at style of thought based upon an ontological and epistemological distinction made between 'the Orient' and ... 'the Occident.'" It invokes a flexible positioning superiority in which Europe is put into a number of positions of superiority. It is "part of an overall campaign of self-affirmation, belligerency, and outright war," (Said xix) however, and in this we see the religious implications. "For much of its history... Orientalism carries within it the stamp of a problematic European attitude toward Islam." (Said 73) Islam was a threat to a Christian Europe - the Ottoman Empire lay geographically close to Christian lands, so there was not only the threat of different religious ideas but also the treat of a mighty military and political power. It resulted in a historical fear of Islam. Orientalism was essentially an attempt to domesticate that threat, but "the Orient needed first to be known, then invaded and possessed, then re-created by scholars, soldiers, and judges who disinterred forgotten languages, histories, races, and cultures in order to posit them... as the true classical Orient that could be used to judge and rule the modern Orient." (91-92) The Occident responded with the creation of an imaginative geography within which Islam could be confined. Orientalism "legitimates a vocabulary, a universe of representative discourse peculiar to the discussion and understanding of the Orient" (Said 71) and it consisted of a "set of representative figures, or tropes." (Said 71) This does not go to say that Orientalism formed the cornerstone of truth of the Orient, but rather that it was "Western ignorance which becomes more refined and complex, not some body of positive Western knowledge which increases in size and accuracy." (Said 62) As a field of knowledge it is a closed body of knowledge "in which objects are what they are because they are what they are, for once, for all time, for ontological reasons that no empirical material can either dislodge or alter." ...read more.

This representation, a man-made construct, is found in the textual form. The imagination is what makes sense of information and puts together these representations: both Bouvard and P�cuchet realize that "without the imagination, history is defective." (Flaubert 162) Knowledge could not be conceived of as something that represented reality in its totality, but rather as something that imitated reality as a concise and manageable representation: "one might take a subject, exhaust the sources of information concerning it, make a good analysis of them, then condense it into a narrative, which would be, as it were, an epitome of the facts reflecting the entire truth." (Flaubert 154) This is the very essence of modern Orientalism and what Silvestre de Sacy himself did - he took sections from the library on the Orient that he deemed important and as best representations of the reality that he wished to present, and this formed the cornerstone of authentic, scientific, modern Orientalism. Bouvard put it concisely by saying that "science is constructed according to the data furnished by a corner of space. Perhaps it does not agree with all the rest that we are ignorant of, which is much vaster, and which we cannot discover." (Flaubert 96) It essentially boils down to the realization that "knowledge no longer requires application to reality; knowledge is what gets passed on silently, without comment, from one text to another. Ideas are propagated and disseminated anonymously, they are repeated without attribution; they have literally become idees recues: what matters is that they are there, to be repeated, echoed, and re-echoed uncritically." (Said 116) Our two heroes eventually give up this pursuit of knowledge when they realize it's best not to dabble in reality. They return to their life as copyists - "from trying to live through and apply knowledge more or less directly, Bouvard and P�cuchet are reduced finally to transcribing it uncritically from one text to another." ...read more.

(Said 159) This is just as Silvestre de Sacy did, and Lane reinforces the tradition of disposing of pre-existing knowledge; this is the emergence of his authority as a modern Orientalist. "Thus while one portion of Lane's identity floats easily in the unsuspecting Muslim sea, a submerged part retains its secret European power, to comment on, acquire, possess everything around it." (Said 160) It is a masked power, a hidden power, and this is the difference between modern and classical Orientalism - the classical Orientalism was engaged in an outright war against the Islamic lands; this new process was a much more subtle one by which the Orient would be dominated through the knowledge that was constructed of it through direct, supposedly objective observation and recorded detail: "Lane's prose never lets us forget [that] that ego, the first-person pronoun moving through Egyptian customs, rituals, infancy, adulthood, and burial rites, is in reality both an Oriental masquerade and an Orientalist device for capturing and conveying valuable, otherwise inaccessible information." (Said 160) Essentially, the modern Orientalist, through his various philological methods, established his position as the creator "of Oriental culture [that] became categorically Oriental." (Said 166) It characterized the Orient as an objectively presented reality, as if all knowledge on it was secular, as if structures of Occidental power were not secretly entangled in the framework of the study. "Orientalism acquired the Oriental as literally and as widely as possible; on the other, it domesticated this knowledge to the West, filtering it through regulatory codes, classifications, specimen cases, periodical reviews, dictionaries, grammars, commentaries, editions, translations, all of which together formed a simulacrum of the Orient and reproduced it materially in the West, for the West." (Said 166) The Orient, a Western creation, thus existed as an extension of Western power, restoring the Orient to the context of the present in an ever-changing world where power has to evolve to successfully continue dominating. ...read more.