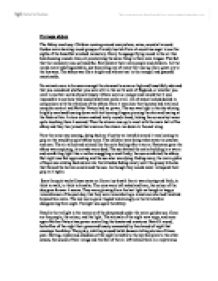 Furness abbey The Abbey was busy. Children running around everywhere, noise, sound all around. Guides were showing round groups of rowdy tourists from all countries eager to see the sights of the beautiful wrecked monastery. Every Language flying round in the air like bees buzzing round a hive, all proclaiming the same thing in there own tongue. The fact that the monastery was so beautiful. Everywhere there were people and children. All the words were indistinguishable, just becoming one of many that rose up like a great cry to the heavens. The abbey was like a bright and vibrant tear in the tranquil and peaceful countryside. No animals were to be seen amongst the stonewalls some so high and beautifully adorned that you wondered whether you were still in the north west of England, or whether you were in another world of pure beauty. Others were so meagre and ruined that it was impossible to see how they could have been walls at all. All of nature looked dulled in comparison with the vibrancy of the abbey. Here it was clear that humans had total and complete control and Mother Nature had no power. ...read more.

The last warm glow tingled tantalisingly on the hills before disappearing from sight. Twilight was upon the abbey. Dead in the twilight is the memory of the day passed under the warm golden sun. Gone are the people, the colour, and the light. The animals of the night now reign, and once again Mother Nature has power controlling the beasts and creatures. Bats flit round, butterflies of the night their grace and beauty concealed by the shroud of night that envelops the abbey. They play, whirling around ballet dancers telling stories of times past. Darting, mysterious shadows of the night invisible to the eye but plain to the other senses; the sound of their wings and the feel of the air left behind them in a mysterious trail. The abbey mourns; its magnificent walls heave and buckle under the sorrow of years gone by. The lone owl cries out a wail in mourning for the daylight now gone. The shadows leap out swirling round tricking and deceiving the eyes. Locked up and left the abbey stands alone the last man on a battlefield all the comradeship gone. ...read more.

The stream that once babbled happily has to been engulfed in the darkness its sound is the only thing that can be heard for miles around. The world is so dead and coated in darkness that the air is thick with the smell of the night and it seems as though a new day will never come. The everlasting night has swept through the abbey like a disease but from over the hills a warm red glow has spread gently lighting up the abbey; animals are scurrying back to there homes and then. A solitary ray of light now shines out catching the edge of the east wall illuminating the beautiful architecture that frames one of the great windows in the hall. It shines down like a ray of hope in the dark night; the sun is rising as more of the abbey is illuminated a single ray falls on a stone carving of Jesus like a sign from the heavens that morning is here. The sun rises, its beautiful shape emerging from in between two trees its sheer beauty taking up the whole sky. The dark tentacles of the night are fought into submission by the powerful sun rays. The night releases its hold on the abbey. For now a new day dawns. ...read more.