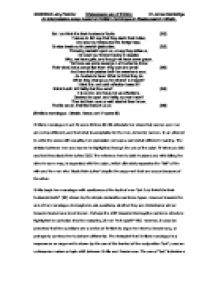 Othello. Emilias monologue in act IV scene iii lines 82-99 articulate her views that women and men are not so different

An interpretative essay based on Emilia’s monologue in Shakespeare’s Othello.

Emilia’s monologue in act IV scene iii lines 82-99 articulate her views that women and men are not so different, and that what is acceptable for the men, is too for women. In an attempt to unite the sexes with equality, her expression conveys a somewhat different meaning. The division between men and women is highlighted through the use of the colon “if wives do fall: say that they slack their duties.”[83] The reference here to both husband and wife failing the other in some way, is separated with the colon, which ultimately separates the “fall” of the wife and the men who “slack their duties” despite the argument that one occurs because of the other.

Emilia begin her monologue with confidence of the fault of men “but I do think it is their husbands faults” [82] shown by the simple declarative sentence types. However towards the end of her monologue she begins to ask questions, whether they are rhetorical or aimed towards Desdemona is not known. Perhaps the shift towards interrogative sentence structure highlights her confusion into the reasoning of men “is it sport?”[93] However, it could be perceived that the questions are a device of Emilia’s to argue her view to Desdemona, or perhaps to convince her to behave differently. The viewpoint that Emilia’s monologue is a response or an argument is shown by the use of the fronted of the conjunction “but”, used as a discourse marker or topic shift between Emilia and Desdemona. The use of “but” indicates a contrasting opinion, and could also indicate Emilia’s attempts to persuade Desdemona to her point of view. This can also be shown by the use of hedge within Emilia’s utterances “I think” [94] and “I do think” [82], which perhaps outline what could be perceived as self doubt at first glance, is in fact a persuasive device to soften her opinion to the “gentle Desdemona”. Another way in which Emilia does this is with the use of the infinitive tense, with the use of the conditional tense conjunction “if” which takes away the severity of the context, as it is supposing a hypothetical form. Similarly the use of vocative within the monologue is interesting, Emilia uses both “Husband” and “Wife” and the pronouns “they”, “I”, “we” and “our” as determiners to whom doing which action. It is notable that the vocative “Husband” and “Wife” never appear on the same line, and instead are separated through enjambment and punctuation, “if wives do fall: say that they slack their duties.” [83] The use of “wife” and “their” divides men and women, even despite the union of marriage.  The use of the inclusive pronouns such as “we” and “our” are used as a device to create unity amongst women, not amongst the sexes despite the context of the text. The inclusive pronouns used alongside the exclusive pronoun “they” in regards to men is used to metaphorically distance the men from Desdemona and to bring Desdemona closer to Emilia and her reasoning.

The portrayal of women in Othello, and generally speaking in Shakespeare’s tragedies on a whole, is that of passive victims, or deceivers of men. In Othello, we see the portrayal of women split more specifically into the “strumpet” and the “virtuous” and the confusion between the two ultimately creates the tragedy within Othello.  The “gentle Desdemona” [I.ii 25] is portrayed an emblem of a chaste Elizabethan life. Alongside the constant allusions to her purity and whiteness, Desdemona’s virtue is particularly evident within act IV scene iii in which she and Emilia discuss adultery, overall highlighting two very different opinions.

The religious imagery created with the use of “heavenly light” not only asserts this question in regards to the morality of the women in question, but overall fortifies the two women’s responses in regards to God and the conduct expected in a very religious conscious, Elizabethan society. Thus, overall reinforcing Desdemona as a virtuous character, on the other hand Emilia’s dark humour, leads the audience into questioning her character. The division between the stereotypical characterisation of women, and the differences in the two women’s opinions of ethics, creates a conflicting view point for the monologue which is to be examined.

Emilia’s monologue expressed after her admittance that “The worlds a huge thing; it is a great price for a small vice” [IV.iii.66], goes somewhat to allow her to explain her reasoning.  Although she speaks of pouring “our treasures into foreign laps” [84], treasures denoting sexual favours and foreign laps, meaning other partners, Emilia in her monologue manages to maintain her pride and dignity whilst directly discussing the ideas of adultery and “revenge”. Emilia is not an idolised woman like Desdemona is portrayed, nor she is not a whore as Bianca is portrayed, she manages to articulate a balanced view which perhaps indicates that she plays a balanced female role and that she is neither end of the stereotypical spectrum. “She rejects the identification with Bianca yet sympathises with female promiscuity. She corrects Desdemona’s occasional naiveté but defends her chastity.”[1]  Despite Emilia’s contrasting opinion to Desdemona in regards to promiscuity, she is not her opposite, instead, heightened by Desdemona’s apparent naivety, Emilia’s viewpoint is represented as a more cynical, as opposed to Desdemona’s more romanticised ideas. “The contrast between the two women could not be more brilliantly articulated of more apt. We see that Desdemona would not be on the verge of destruction if she were only more like the grosser, cold and more sophisticate Emilia. Yet we also see that if she were more like Emilia, she would not be Desdemona.” [2] Emilia’s cynicism is perhaps more a case of practicality and experiences of living a married life. Emilia’s expression, “have not we affection, desires... and frailty, as men have?” [96-97], the use of the abstract nouns outlines her belief in equality of the sexes in regards to emotion, that both act as a result of human nature.  Similarly Emilia’s words “The ills we do, their ills instruct us so.” [98-99] mirror that of Bianca “I am no strumpet; but of life as honest as you that thus abuse me.” [V.i 122-123] Both women’s words highlight quite a feminist acceptance of sexual promiscuity, on the other hand, whilst Shakespeare manages to merge the lines between virtuous and strumpet, he firmly secures the women in the role of the passive victim.

In conclusion, Shakespeare creates comparisons between the three women in Othello. In particular the women’s relationship with men it is notable that all three women have been ill used by men. Emilia states that men “are all but stomachs, and we are all but food. / They eat us hungrily, and when they are full, / They belch us” (III.iv.100–102) This creates a sense that Emilia has been hurt by Iago, an through experience, shown by the use of past tense, she has known what it is like to be devoured by love and then rejected, yet survive it. Bianca and Desdemona, the two most different women, both being called strumpet creates a direct comparison. The comparison between the women unites them, similarly to the use of inclusive and exclusive pronouns within Emilia’s monologue. Bianca’s response “I am no strumpet; but of life as honest as you that thus abuse me.” [V.i 122-123] as I said previously highlights a sense of acceptance of female promiscuity as a result of men’s “abuse”, similarly to Emilia. However Desdemona’s response “Be not to be a strumpet, I am none.” [IV.ii.87] although a similar response to Bianca’, highlights not only her pride but lack of experience. This experience quite possibly could be what Emilia in her monologue tries to give to Desdemona, and perhaps tries to persuade her to change her honest ways in order to survive. In relation to this, it could be assumed that Desdemona’s death could also be a result of her naivety and reluctance to adapt to survive.