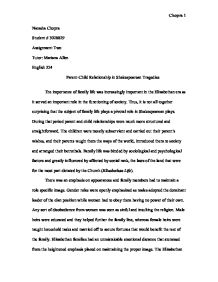 Natasha Chopra Student # 3028829 Assignment Two Tutor: Mariana Allen English 324 Parent-Child Relationship in Shakespearean Tragedies The importance of family life was increasingly important in the Elizabethan era as it served an important role in the functioning of society. Thus, it is not all together surprising that the subject of family life plays a pivotal role in Shakespearean plays. During that period parent and child relationships were much more structured and straightforward. The children were mostly subservient and carried out their parent's wishes, and their parents taught them the ways of the world, introduced them to society and arranged their betrothals. Family life was binded by sociological and psychological factors and greatly influenced by affected by social rank, the laws of the land that were for the most part dictated by the Church (Elizabethan Life). There was an emphasis on appearances and family members had to maintain a role specific image. Gender roles were openly emphasized as males adopted the dominant leader of the clan position while women had to obey them having no power of their own. Any sort of disobedience from women was seen as sinful and insulting the religion. Male heirs were educated and they helped further the family line, whereas female heirs were taught household tasks and married off to secure fortunes that would benefit the rest of the family. Elizabethan families had an unmistakable emotional distance that stemmed from the heightened emphasis placed on maintaining the proper image. ...read more.

Even though he is speaking directly to her he says "my daughter", pointedly claiming authority and possession over her. When he speaks of her "honor" he is in fact concerned with his own image as it is necessary for his offspring to act decorously in society to maintain an appropriate image since it reflects back on him as her father. Although it is her private matter she allows her father to interfere and carries out his wishes as she informs him later in the play, "As you did command, I did repel his letters and denied his access to me." (Line 105-107). Her identity seems to depend upon her father so much so that after his demise she loses herself to madness having no one to puppeteer her any longer. The father-daughter relationship seems built upon a male hierarchical system of dominance. In King Lear there is another father-daughter scenario that is somewhat similar. Lear is at once a father and monarch yet at times both the roles seem to merge into one as he is not able to separate them. The play opens with the king demanding his three daughters Goneril, Regan, and Cordelia to publicly demonstrate their devotions to him in order to gain their inheritance. The first two appease his ego with flattering speeches punctuated with over the top recommendations of love for him. Yet through the youngest, Cordelia's aside's it is apparent that the two are insincere as she says, "And yet not so, since I am sure my love's more ponderous than my tongue." ...read more.

(Line 322) He also feels betrayed by his mother who rashly married her brother in law and he exclaims, "Fraility, thy name is woman" (Line 245). He becomes misogynistic as a result as his mother represents women and moral corruption. Perhaps this is the reason he is unable maintain a relationship with Ophelia who he advises, "Or, if thou wilt needs marry, marry a fool, for wise men know well enough what monster you make of them." (Line 189) It is clearly that he is projecting his mother's vices on Ophelia, as he believes if his own mother is capable of adultery then he should not expect more from any other woman. Though Hamlet and King Henry have different plots, the reader can draw similarities in the way familial Shakespeare portrays relationships. Both plays deal with issues that are relevant in today's society. The parent's treatment of their children has lasting effects in their socialization. As children like Ophelia who are sheltered too much find that they are unable to function in society independently. Also, in families where children are brought up in a competitive environment the familial bond can become weak and ends up with sibling rivalry and children resenting parents, as was the case in King Lear. Moreover, romantic relationships are greatly influenced by the relationship the child observes at home between parents and the one he or she shares with them. While Shakespeare set up many stereotypical relationships he aptly illustrated the downfalls of negligent parents that can still be applied today. ...read more.