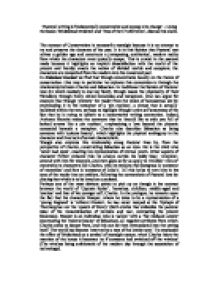 Pastoral writing is fundamentally conservative and opposed to change Using the books Brideshead revisited and Tess of the Durbervilles, discuss this claim.

'Pastoral writing is fundamentally conservative and opposed to change' - Using the books 'Brideshead revisited' and 'Tess of the D'urbervilles', discuss this claim. The concept of Conservatism is necessarily nostalgic because it is an attempt to try and preserve the elements of the past. It is in this fashion that Pastoral text relives a golden age and constructs a juxtaposing, antithetical, modern reality from which the characters must typically escape. This is crucial in the pastoral mode because it highlights an implicit dissatisfaction with the world of the present and thereby enacts the notion of divided worlds and escapism; the characters are compelled from the modern into the conserved past. In Brideshead Revisited we find that Waugh concentrates heavily on the theme of conservation. One way in particular he explores this convention is through the relationship between Charles and Sebastian. In traditional the fashion of Pastoral love (In which modesty is one key facet), Waugh masks the physicality of their friendship through thinly veiled innuendos and metaphors. One can argue for example that Waugh 'protects' the reader from the vision of homosexual sex by enshrouding it in the metaphor of a 'pin cushion', a phrase that is actually italicized within the text, perhaps to highlight Waugh's own self awareness of the fact that he is trying to adhere to a conservative writing convention. Indeed, Anthony Blanche makes the comment that he 'should like to stick you full of barbed arrows like a pin cushion', emphasising a love beyond the platonic concealed beneath a metaphor. ...read more.

Waugh himself wrote this book as an attempt to conserve the past, remarking that he had escaped into the story by becoming 'infused with a gluttony for food and wine', in response to his reality of 'beans'. However, his desire to preserve the past turns out to be a 'panegyric preached over an empty coffin', suggesting that the necessity of his desire to preserve was irrelevant and thus not pastoral. Finally we have the theme of religion, fundamentally anti-pastoral and anti-conservative in nature because it focuses on looking ahead rather than backward. In the initial part of his nostalgic return, Charles makes a cross merely because he believes it to be 'polite', mirroring Sebastian's relationship with Catholicism as equally arbitrary because he 'likes the stories'. However, later on the story we find that this superficial 'cross' becomes a 'small red flame' of faith. Charles willingly leaves his nostalgic journey at this point, another anti-pastoral choice by Waugh, and becomes 'unusually cheerful' having done so, enacting the final passage of acceptance from the conservative past into the modern reality. In Tess of the D'Urbervilles, Hardy constructs a very definite sense of divided worlds, between the old pagan, natural one and the modern one. One obvious example of this is the landscape of Sandborne and Egdon Waste, which form two juxtaposing settings to highlight this. Sandborne is a 'glittering pleasure palace', a 'fashionable watering hole', with emphasis on the words 'pleasure' and 'fashionable', which enacts a certain sense of superficiality. ...read more.

This is in a direct contrast to the new, modern lineage of d'Urberville, one that was bought with money made 'in the industrial north', enacting the modern encroachment onto the past. Furthermore, this decline is representative of a wider destruction of the old, pagan way of life in the country. The new term for 'workfolk', a term that implies comradeship and voluntary collectivism, is replaced by 'labourer', which is a name that reflects upon a specific set of actions for a specifically designated purpose, contrasting the former 'workfolk' by suggesting a predetermined existence in the modern world. Hardy is clearly trying to mourn the loss of the natural in place of the 'steam feelers' representing the alien ('feelers' connoting a parasitic or insect-like movement) taking over England. There is however examples of where the pagan ideal subverted somewhat. Hardy arguably makes the bloodline of the d'Urbervilles hollow for example, undermining the argument that he is attempting to conserve the old ways. When Alec strides about Kingsbere where Tess's relatives lie, he makes a 'hollow echo' sound, perhaps reflecting the hollow nature of the bloodline? The d'Urberville family are described as 'snoozing in their crypts', arguably highlighting a certain passivity towards the immediate plight of their brethren. When Angel idealises Tess, he describes her as being both 'Athena' and 'Demeter', when the two deities are diametrically opposed to one another. Athena is a chaste who glories in the hunt; Demeter is a caring being of fertility and nature, suggesting an inconsistency in his desire to escape into a natural past. ...read more.