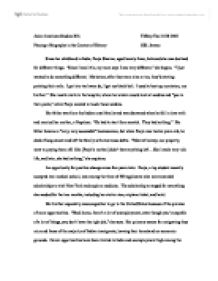 Placing a Biography in the Context of History

Asian American Studies 20A Tiffany Tsai 1619 2666 Placing a Biography in the Context of History GSI: Joanne Since her childhood in India, Pooja Sharma, aged twenty-three, believed she was destined for different things. "Since I was little, my mom says I was very different," she begins. "I just wanted to do something different. My sisters, after they were nine or ten, they'd starting painting their nails. I got into tae kwon do; I got my black belt. I used to beat up my sisters, my brother." She recalls visits to the hospital, where her sisters would look at needles and "pee in their pants," while Pooja wanted to touch those needles. Her father was from the Indian royal family and was disowned when he fell in love with and married her mother, a Nepalese. "He had to start from scratch. They had nothing." Her father became a "very, very successful" businessman, but when Pooja was twelve years old, he died of lung cancer and left the family with enormous debts. "Most of money, our property, went to paying them off. She [Pooja's mother] didn't have anything left... She lived a very rich life, and later, she had nothing," she explains. An opportunity for positive change arose five years later. Pooja, a top student recently accepted into medical school, was among the three of 500 applicants who were awarded scholarships to visit New York and explore medicine. The scholarship arranged for everything she needed for the two months, including her visitor visa, airplane ticket, and hotel. Her brother especially encouraged her to go to the United States because of the promise of more opportunities. "Back home, there's a lot of unemployment, even though you're capable of a lot of things, you don't have the right job," she says. ...read more.

It was really hard. Like for nanny, get up four o'clock in the morning, take classes in the afternoon, go back, do babysitting for someone else. I cooked for people, and I helped them do laundry, iron their clothes." These three jobs were in addition to being a full-time student: "I had to take twelve units [because] I was an international student, so no less than twelve units. But I used to take fourteen to fifteen units. It was really hard," she remembers. "I got no sleep." She was like most Indian immigrants, working very long hours to succeed.2 Fortunately, in a month or two, during her second year at the community college, the lawyer whom she worked for sponsored her for her green card. "He saw me struggling. He really liked me, so he sponsored me as his worker...my green card was processing and the next three, four months, I got my work permit for a year." With a valid work permit, she quit one of her nanny jobs and started a higher paying hostess and cashier job at Marie Callender's Restaurant, and in a few months worked up to being a server. At the end of her second school year, she also started working at Hobee's Restaurant as a server. Her schedule was still very busy, she says. "Morning, Hobee's. Friday, Saturday, Sunday, I used to work morning 7:00 [a.m.] to 3:00 Hobee's, then Marie Callender's 4:00 to 11:00 [p.m.]. And I had school. I had babysitting. So I had 3 jobs until then." When her residency was proven after a few months, her life finally became easier. She was able to pay the resident's tuition of $10 per unit at the community college. ...read more.

I always wanted to be a doctor." Now, Pooja and her mom are saving money to recover the two houses and the land they sold when her father died. "It means a lot to her, you know, and she had to sell it...So for the past two years, since I started working, getting good pay, I started helping her $500-600 a month, and we bought one of the houses back already [$50-60,000 in five years]. And we're trying to get our land back now...with another $30- 40,000. We have around $10,000 so we need another $20,000 or so." Like so many immigrants, Pooja wishes to return to her family but knows she has found more economic opportunities in the United States.1 "I miss my family. That's where I belong, but I know I'm not going to achieve my dream being there. And when I feel like I have enough [money], I can go back and do something on my own." She believes emigrating has bettered her life, despite the loneliness and long hours of work. "If I hadn't come here, I wouldn't have become doctor back home. Get married." She laughs as she reflects upon her emotional growth since coming to the United States. "I learned a lot. I didn't know anything about American culture. I didn't know anything about immigration. I didn't know anything," she says about her first years in the United States. "I used to work at people's houses. If they don't pay me, I'll be, like, I don't want to get in trouble. Now, I know I worked for them, and it was my right to get paid." She knows her family will be surprised to see how much their youngest member has changed. "I feel more confident. I feel like I know more, and I know the system well-I just know so much more," she says proudly. ...read more.