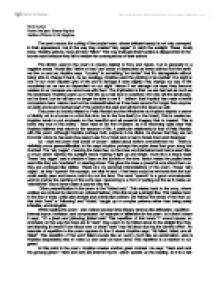 Niels Looije Poem Analysis: Binsey Poplars Author of Poem: G.M. Hopkins The poet mourns the cutting of the poplar trees, whose delicate beauty is not only conveyed in their appearance, but in the way they created "airy cages" to catch the sunlight. These lovely trees, Hopkins grieves, have all been "felled." This may insinuate that Hopkins is disappointed in the human race because they fail to realize the consequences of their actions The diction used in the poem is closely related to flora and nature, but is generally in a negative sense. Words like "delve or hew" are words of destruction as these actions hurt the earth we live on and as Hopkins says, "country" is something "so tender" that it's damageable without being able to change it back. As an analogy, Hopkins used the pricking of an eyeball. Our sight is one of our most valuable gifts of life and to damage it even slightly may change our way of life completely as we are so dependent on our sight. Hence if we damage our eyes they become useless to us, because we cannot see with them. ...read more.

This gives the trees a powerful aura about them as they are portrayed like deities. These are my personal interpretations of the poem. These "airy cages", as they "quench" the sunrays, are vital to land. If the trees would be removed then the sun could easily pass and hence could dry out the land. The word "quench" is a good onomatopoeic word to portray the catching of the sun's rays. Quenching is a form of putting out fire as it makes an "shhhhhhhh" sound when water is poured very fire. Other personification in the poem is the "folded rank". This relates back to the army, where soldiers are ordered to stand in an ordered fashion; often this is just a straight line. This relates back to the line of trees, while also straight and orderly like soldiers, yet follows the bends of the river, so that their "rank" is "following" and "folded," caught up in complex patterns rather than being solely inflexible, and intangible. While reading the poem I also noticed several other literary devices like alliteration, repetition, internal rhyme, inversion, and compression. An example of alliteration in the poem is in line 4 where it says: "Of a fresh and following folded rank" ...read more.

An example of compression is line 5 where it says: "Not spared, not one", this is down to bring about the emphasis and to a certain extent scare the reader that nothing is left of the trees. This can be established from the fact that it is an extremely short sentence. There is some further compression in line 20 where: "After-comers cannot guess the beauty been." The compression happens after beauty, where there is a word missing (...that has...) but the essence of the sentence is still the same. This compression occurs to keep the rhythm of the sentence structure constant. Throughout this poem, Hopkins tries to make it clear to us that nature is one of the most important things in our lives, this is why he compares it to our eyes, an organ of high priority which we can not live without. This is his major concern that humans do not realize the implications of their actions and eventually destroy all natural things without realizing their loss. Hopkins has realised this and written a successful reactionary poem to bring this to the readers attention and I believe he was very successful. ...read more.