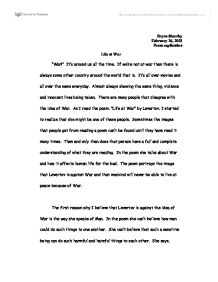 Bryan Stearley February 26, 2003 Poem explication Life at War "War!" It's around us all the time. If we're not at war then there is always some other country around the world that is. It's all over movies and all over the news everyday. Almost always showing the same thing, violence and innocent lives being taken. There are many people that disagree with the idea of War. As I read the poem, "Life at War" by Levertov, I started to realize that she might be one of these people. Sometimes the images that people get from reading a poem can't be found until they have read it many times. Then and only then does that person have a full and complete understanding of what they are reading. In the poem she talks about War and how it affects human life for the bad. ...read more.

Someone who laughs and cries just the way do. The second reason why I believe that she is against War is the way she speaks of war and how it has become a part of our lives in everything we do. She claims that "The disasters numb within us caught in the chest, rolling in the brain like pebbles"(963). By this she means that people have become numb to all the pain and suffering that go along with the acts of War. We as people don't feel remorse for the people we kill at war. We think that we're doing the right thing when we take that other persons life, but does that person even have anything to do with the reason why the war is being fought? Most often he's just a person chosen to go off and die for his country. ...read more.

We can't get rid of War or just shut it out. It only goes away when the people of the world are at peace with each other. Its in our history, its here now in the present, and it will definitely be in our future for many years to come. After reading this poem over and over these images became clearer each time I read it. I began to see that she was indeed against the thought of War and possibly could have suffered from the things that were seen on the battlefield. Her arguments are strong and supported in her thoughts. The main images in the poem are that mankind has been corrupted by these images of War. Our world has accepted War as a part of their lives and believe it is a necessary thing to survive. Her take is different in that she thinks that War is not needed and wishes that the world could live at peace together without the fear and thought of War. ...read more.