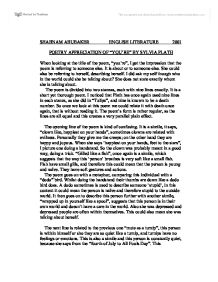 SHABNAM ABUBAKER ENGLISH LITERATURE 2001 POETRY APPRECIATION OF "YOU'RE" BY SYLVIA PLATH When looking at the title of the poem, "you're", I get the impression that the poem is referring to someone else. It is about or to someone else. She could also be referring to herself, describing herself. I did ask my self though who in the world could she be talking about? She does not state exactly whom she is talking about. The poem is divided into two stanzas, each with nine lines exactly. It is a short yet thorough poem. I noticed that Plath has once again used nine lines in each stanza, as she did in "Tulips", and nine is known to be a death number. ...read more.

Fish have small gills, and therefore this could mean that the person is young and na�ve. They have soft gestures and actions. The poem goes on with a metaphor, comparing this individual with a "dodo" bird. Whilst doing the handstand their thumbs are down like a dodo bird does. A dodo sometimes is used to describe someone 'stupid', in this context it could mean the person is na�ve and therefore stupid to the outside world. It then goes on to describe this person further with another simile, "wrapped up in yourself like a spool", suggests that this person is in their own world and doesn't have a care in the world. ...read more.

This stanza is also full of similes. "Vague as fog and looked for like mail", suggests that this person was very hard to speak to and to relate to, and they were so far away "Farther off than Australia." This human being was still small like a "bud" and hardly noticed like a "sprat in a pickle jug". This person is very ductile they are like a "clean slate", which could easily be broken. The poem does not have a rhyme, or a rhythm. The tone is very happy at first with the 'clown' but goes on to being lonely as she describes this person's distinctiveness. This now brings me to my conclusion. I personally did not enjoy this poem. To me there was a very sinister and empty feeling, which made me very depressed. It was very descriptive with all the use of similes and metaphors. ...read more.