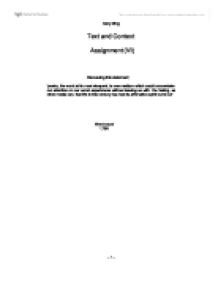 'poetry, the word at its most eloquent, is one medium which could concentrate our attention on our worst experiences without leaving us with the feeling, as other media can, that life in this century has had its affirmative spirit burnt out'

Text and Context Assignment (VI) Discussing this statement; 'poetry, the word at its most eloquent, is one medium which could concentrate our attention on our worst experiences without leaving us with the feeling, as other media can, that life in this century has had its affirmative spirit burnt out' Word count 1,766 . . Baudrillard argues that 'art is everywhere, since artifice lies at the heart of reality' and Warhol claimed art can become a reproduction machine1, Tony Harrison, the Leeds born poet, captures this art that lives not only the everyday situations, as in the train journey described within Initial Illumination, but also the art that the machine called War produces, as we see in A Cold Coming, Harrison's poem about the first gulf war. Tony Harrison has been described as having a quicksilver imagination for ideas, images, and unusual connections, and, for reasons he makes explicit in his poetry, like Warhol with art, he [Harrison] has come to see the actual production of verse as a quasi-industrial process2. Increasingly, the British political environment is said to be having a direct and recognisable effect upon poets3. Harrison, vocalising his opposition to the first Gulf War, has produced two very successful and interesting pieces of work in his disagreement to the destruction of Iraq. ...read more.

10 Tony Harrison has acknowledged the pessimism of his own poetry,11. Even so, poetry is a valuable form of communication because of the continued cultural value placed upon it by society and its continual impact upon society, because of its capability of expressing complex human emotions, and because of its quality of inviting moral and social inquiry.12With lines such as Stars and Stripes in sticky paws May sow the seeds for future wars Each Union Jack the kids now wave May lead them later to the grave (lines 134-136)13 Harrison uses the image of children's flag waving patriotism in such a way as to raise the moral eyebrows of his critics, perhaps Harrison is taking from the poet Wilfred Owen who once stated that all poets can do is warn14 A Cold Coming carries a very definite warning about the futility of war, Here, we see Harrison condemning the nations misplaced patriotism with the lines. But cabs beflagged with SUN front pages Don't help peace in future ages (lines 131-132)15 His [Harrison's] ability to portray not only the macabre, but also the sarcastic humour in the simple, but effective rhyme we see in A Cold Coming can, perhaps, be associated with Harrison's likening the rhyme of a poem to his 'life support system', Rosemary Burton argues, ...read more.

still remains '...the common carrier For the transportation of the public To higher places23 Harrison quotes Nietzsche's observation that 'Art forces us to gaze into the horror of existence, yet without being turned to stone by the vision' While Peter Robinson of Hull University states that "At the heart of Harrison's public art is his poetic gaze, the poetical countering of anything that acts to diminish our humanity"24. Finally the reader can see that the gaze of the poet squares up to the horrors that lie in wait for us and continues speaking. It can be argued that Harrison's poetic outlook provides the reader with a way of looking at things from which they might otherwise turn away. While doing so Harrison has the ability to portray the emotions and events of life in simple language. Relying upon the response of the reader this leads to the poems themselves being staggeringly simple but portraying things that could not be put into words on endless pages of prose. This is the achievement of the public poet. The world of poetry is full of reasons that answer the question set by this essay all of which echo the primary function of poetry and that is to make us more aware of ourselves and the world around us. . ...read more.