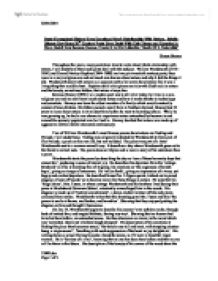 Poets Throughout History Have Examined Man's Relationship With Nature. Briefly Discuss How Some 20th Century Poets Have Dealt With This Theme and Examine In More Detail How Seamus Heaney Treats It In His Collection 'Death Of A Naturalist'

Poets Throughout History Have Examined Man's Relationship With Nature. Briefly Discuss How Some 20th Century Poets Have Dealt With This Theme and Examine In More Detail How Seamus Heaney Treats It In His Collection 'Death Of A Naturalist' Simon Hearne Throughout the years, many poets have tried to write about Man's relationship with nature, I will study how three such poets deal with this subject. William Wordsworth (1770-1850) and Gerard Manley Hopkins (1844-1889) are two pre-twentieth century poets, they were in a very religious era and not much was known about nature and why it did the things it did. Wordsworth dealt with nature as a separate entity, he wrote about nature like it was a living thing that could be hurt. Hopkins dealt in his poems mainly with God's role in nature and the beauty, sometimes hidden, that nature always has. Seamus Heaney (1939-) is a modern poet and is still alive today, he lives in a non-religious era and we now know much about nature and how it works thanks to technology and scientists. Heaney was born the eldest member of a family which would eventually consist of nine children. His father owned a small farm in Northern Ireland, Heaney had 12 years to learn about nature in its wildest form before he went to boarding school. While he was growing up, he had a rare chance to experience nature untouched by humans in and around the sparsely populated area he lived in. ...read more.

Wordsworth writes the last three lines as the end of the letter to Lucy, telling her to be gentle with nature, 'for there is a spirit in the woods' which can be hurt just like humans. Wordsworth obviously believed that nature is just as, and maybe more so, beautiful as humans, and that humans have some kind of desire in them to destroy this greater beauty. He believed that nature had a 'spirit' like humans have souls, and that pillaging trees for food and pleasure hurts nature like a rapist hurts their victim. Nature is a separate entity which interacts and hurts like humans. Gerard Manley Hopkins wrote over one thousand poems in his lifetime, Pied Beauty, Inversnaid and are two which are about nature. Pied Beauty is structured very much like a prayer, starting with 'Glory be to God' on the first line and 'Praise him' on the last. It is similar in content to the hymn 'All things Bright and Beautiful' by Cecil F. Alexander in 1848, in the same era as Hopkins. He writes that God should be praised for 'dappled things', imperfect things, like 'skies of couple-colour as a brinded cow' in nature. He tries to convey the message that God is almighty and created everything, even things that might seem to be imperfect to humans are beautiful in their complexity. He uses sibilance and alliteration in almost every line to make all his words stand out and make an impression on the readers mind. ...read more.

Heaney writes that the air was 'thick with a bass chorus', showing that there was a mass of frogs, incorporating the military theme again as the bass chorus could refer to constant gunfire or a marching band. Heaney then goes on to describe the frogs as 'cocked on sods', also referring to the military, associated with cocking a rifle, showing that the frogs are poised to attack. Heaney writes also that some of the frogs hopped, as if manoeuvring into a better position for attacking. He uses onomatopoeia to describe the 'obscene threats' the frogs were giving. There is another military reference as the frogs are described as 'poised like mud grenades', again showing that they are ready to attack. The frogs' 'blunt heads farted', a gross image in the reader's mind that makes the frogs seem to be inanimate objects that make obscene noises. The man 'sickened, turned and ran', Heaney shows that these small objects of nature can communicate and organise and have emotions, be intimidating enough to scare a human many times larger than them. Heaney describes the frogs as 'great slime kings' and 'gathered for vengeance', the order of supremacy has swapped since the first stanza, the child had total control over the frogspawn and tadpoles, now the frogs ruled their land and are prepared to fight to protect each other. The spawn in the river is personified on the last line where Heaney writes that it would clutch his hand, now the whole river is coordinated and organised and angry with him. ...read more.