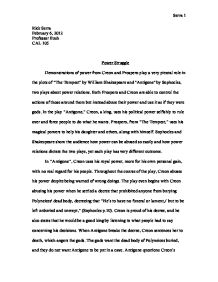 Demonstrations of power from Creon and Prospero play a very pivotal role in the plots of The Tempest by William Shakespeare and &quot;Antigone&quot; by Sophocles, two plays about power relations.

Rick Serra February 6, 2012 Professor Bush CAL 105 Power Struggle Demonstrations of power from Creon and Prospero play a very pivotal role in the plots of "The Tempest" by William Shakespeare and "Antigone" by Sophocles, two plays about power relations. Both Prospero and Creon are able to control the actions of those around them but instead abuse their power and use it as if they were gods. In the play "Antigone," Creon, a king, uses his political power selfishly to rule over and force people to do what he wants. Prospero, from "The Tempest," uses his magical powers to help his daughter and others, along with himself. Sophocles and Shakespeare show the audience how power can be abused so easily and how power relations dictate the two plays, yet each play has very different outcome. In "Antigone", Creon uses his royal power, more for his own personal gain, with no real regard for his people. ...read more.

Haimon believes that Antigone is not doing anything wrong, but instead, simply doing what the gods wanted. He respects his father, but he encourages him to change is stubborn ways, which is why Haimon asks Creon to "end your anger. Permit yourself to change." (Sophocles p38). Haimon kindly asks Creon to change his mind for once and accept what others had to say, but Creon looses his mind and refuses to accept what Haimon had to say. Haimon tells of how Antigone's death will only bring about the deaths of others, and Creon would never see him again. Creon claims that only he was right and yet again, he abuses his power for his own selfishness. After Haimon leaves, Teiresias, the blind profit, comes to tell Creon the gods are angry with him and that he is wrong in wanting to bury Antigone alive. Once more, Creon rejects the advice from a holy figure and does what he wants. ...read more.

In the case of both plays, the two protagonists have the ability to control the actions of those around them, one through shear will and the other through magical powers. In the tempest, magical power is used to bring morality to those who have seem to lost their way. It is used simply as a means to an end, and as a way to correct a wrongful act that had taken place years ago. In the end, the act of Prospero giving up his power indicates that power should only be used to accomplish good acts and then not be used again. Creon, on the contrary, uses power without sound judgment or wisdom. The consequence of this abuse of power is that he loses everything at the end of the play, including his power within his own family. Even though the plots between the two stories are drastically different, the moral of the story is the same: power should only be used in times of necessity and with a moral code. ?? ?? ?? ?? Serra 1 ...read more.