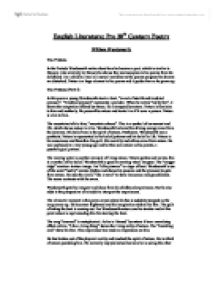 English Literature: Pre 20th Century Poetry William Wordsworth The Prelude In the Prelude Wordsworth writes about how he became a poet, which is similar to Heaney. Also similarly to Heaney he shows fear and escapism in his poems from his childhood. As a child he lives in a surreal world but as the poems progress his dreams are disturbed. Nature is a huge element in his poems and it guides him as he grows up. The Prelude (Part 1) In this poem a young Wordsworth steals a boat, "an act of stealth and troubled pleasure". "Troubled pleasure" represents a paradox. When he writes "led by her", it shows the temptation offered by nature. He is tempted by nature. Nature is feminine to him and motherly. He personifies nature and treats it as if it were a person. Nature is alive to him. The mountains talk to him; "mountain echoes". This is a symbol of movement and life, which shows nature is alive. Wordsworth believed his driving energy came from the universe. His belief was in the spirit of nature, Pantheism. Wordsworth was a pantheist. ...read more.

It is in the Lake District and the ritual is that of skating on the frozen lake. There is a much happier atmosphere and Wordsworth is enjoying himself. The use of the word "blazed" is very effective visual word. The cottages seem to be calling Wordsworth to them but he didn't heed and instead followed nature. He "wheeled about" which is a metaphorical verb as he is on skates. He captures the sound of the skates as they "hissed on the polished ice". This uses alliteration to capture the sound. There is an "imitated chase...resounding horn", he is imagining that he is on a fox hunt. Sharp words such as din and smitten are used. The simile "tinkled like iron" is used; this is onomatopoeia. The cold iron is "icy". There is a melancholy atmosphere, probably exactly like the way Wordsworth felt at that time. The hills are alive. Other kids didn't notice but Wordsworth did. He was very imaginative and perceptive. Wordsworth had the spark of a poet. The "orange sky" paints a picture in one's mind as he moves away from the others. ...read more.

It is all around him. He is one with nature. "Scattered like a flock of sheep" is another simile he uses. Wordsworth then mentions the word murmur for a third time. Nature is speaking to him. "And vacant air" is the climactic moment. On line 44, "Up I rose", he begins to destroy the place. "Dragged, crashed, ravaged". He leaves the place "deformed and sullied". The place is in an awful state. He "mutilated", tore the place apart. The rhythm of the poem had changed. The mood changes from joy to guilt. He realises what he has done. "I felt a sense of pain", the guilt kicks in. The "silent trees". The trees used to talk to him. They used to be alive, but now they are dead. The "intruding sky" comes in on him. It is blaming him. Nature is telling him that he has done wrong. He has learned from his experience. He has now been taught not to do such things. Conclusion Nature is a huge influence on his ethics and morality. Everything Wordsworth became in life stemmed from Nature. "There is a spirit in the woods". He has yet again touched the spirit of nature. Nature is his mother, father, teacher, inspiration, religion, friend, lover, playmate, conscience, discipline and sensitivity. ...read more.