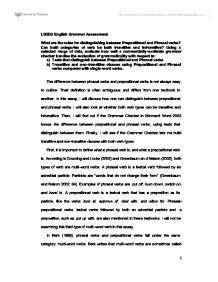 Words that are in focus in a sentence will often sound louder than the other words. In sentences containing phrasal verbs, the adverbial particle, if in final position, is stressed because it is the sentence's main focus. For example, in the sentence Diane turned the radio off, off is stressed. If the particle had been in a different position, i.e. Diane turned off the radio, it would not have been stressed: in this sentence, the main focus is the radio, not off. With sentences containing prepositional verbs, the verb's particle is never stressed, even if it is in final position. So, in a sentence like What problems did you deal with? the particle with is not stressed: the sentence's main focus is the lexical verb, deal. It is worth mentioning that some verbs can be both phrasal and prepositional, but will not have the same meaning in both cases. Downing and Locke (2002: 336) give the verb get over as an example. In the sentence She'll never get over the shock, the verb get over means recover from, and in the sentence I want to get my operation over, it means have [the operation] done. The same five rules apply to these verbs: it would be impossible, for example, to say *She'll never get the shock over, and retain the same meaning. In the next part of this essay, I will discuss whether prepositional verbs and phrasal verbs can be transitive and intransitive. Prepositional verbs can only be transitive: the reason for that is that their particle, the preposition, is the first part of a prepositional object. ...read more.

I will now compare take back to a transitive single-word verb: name. The parents named their baby Mark. *The parents named. It does not make a difference whether the verb is phrasal, prepositional, or single-word: the Microsoft Grammar Checker cannot distinguish between transitive verbs and intransitive verbs. It does not detect any errors. It can therefore not be used in finding out if multi-word verbs can be intransitive and/or transitive. In conclusion, there are five rules that make it relatively easy to distinguish between phrasal verbs and prepositional verbs. Four of them are of a syntactic nature, and the last one is of a phonological nature. To use these rules and test them out, one should under no circumstances rely on the Grammar Checker in Microsoft Word 2003. It is seriously lacking in this area and failed to detect errors that would have been obvious to any English-speaking human being. Only phrasal verbs can, in some instances, be intransitive. The Grammar Checker let me build intransitive sentences with prepositional verbs, something that is entirely ungrammatical. This goes to show that the human brain still easily beats a computer, at least when it comes to grammar! 2483 words Reference list Berk, L. (1999) English syntax: from word to discourse. New York; Oxford: Oxford University Press. Downing, A. & P. Locke (2002) A University Course in English Grammar. London: Routledge Greenbaum, S. & G. Nelson (2002) An Introduction to English Grammar. London: Longman Huddleston, R. (1988) English grammar: an outline. Cambridge: Cambridge University Press. Huddleston, R. & G. Pullum (2005) A student's introduction to English grammar. Cambridge: Cambridge University Press. ?? ?? ?? ?? 1 ...read more.