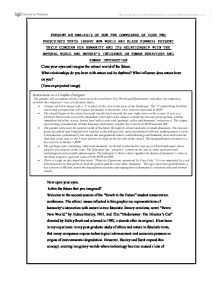 Present an analysis of how the composers of your two prescribed texts (Brave New World and Blade Runner) present their concern for humanity and its relationship with the natural world and nature's influence on human behaviour and human interaction.

PRESENT AN ANALYSIS OF HOW THE COMPOSERS OF YOUR TWO PRESCRIBED TEXTS (BRAVE NEW WORLD AND BLADE RUNNER) PRESENT THEIR CONCERN FOR HUMANITY AND ITS RELATIONSHIP WITH THE NATURAL WORLD AND NATURE'S INFLUENCE ON HUMAN BEHAVIOUR AND HUMAN INTERACTION Close your eyes and imagine the natural world of the future. What relationships do you have with nature and its rhythms? What influence does nature have on you? (Turn on projected image) Now open your eyes. Is this the future that you imagined? Welcome to the second session of the "Reach to the Future" student conservation conference. The ethical issues reflected in this graphic are representations of humanity's interaction with nature in two futuristic literary creations; novel "Brave New World," by Aldous Huxley, 1932, and film "Bladerunner: The Director's Cut" directed by Ridley Scott and released in 1992, a decade after its original. It has been in my experience in my post-graduate study of ethics and nature in futuristic texts, that many composers expose technological advancement and economic pressure as origins of environmental degradation. However, Huxley and Scott expand this concept, creating imaginary worlds where technology has also caused a loss of humanity and change in ethical standards. ...read more.

Huxley's concern advanced to Scott's era as well as our own where globalisation and mass production are the basis of our economy. Furthermore, our current level of technology allows many to live without human interaction, and much human behaviour involves expenditure, not the conservation of nature. Like structure in BNW, Symbolism works in Bladerunner in illustrating behavioural conditioning as detrimental to human behaviour, a concern that continued from Huxley's era to the 1980's. In the opening sequence, a long camera shot places our focus on a symbol of consumerism, epitomised by the 'geisha' Asian woman 'pill popping' on an animated billboard. When considering BR's setting, the continual reappearance and placement of the billboard on a skyscraper, Scott typifies consumerism as holding precedence over nature and humanity in Los Angeles, 2019. This consumerism symbolises the rise of the Asian trans-national corporations of the 1980s which was feared as an economic form of communism. The world was constantly reminded of the benefits of purchasing yet was rarely informed about the state of the environment which led to the considerable level of environmental degradation, including acid rain. Today, most developed countries have signed treaties regarding the environment. ...read more.

Humanity in 2019 has no sense of the value of interaction, and consequently Ridley Scott placed the capacity for these human qualities in the Replicants. Ironically though, when the Replicants begin to show human emotion and need, such as Batty's need to 'meet his maker,' they are 'retired' by the human, by ultimately inhuman character, Deckard. This irony illustrates Scott's concern for a scientifically advanced world, with a dismal appreciation of human qualities and value. The same concern is expressed in the 1997 futuristic popular culture film, "Gattaca," where your personality is irrelevant as genetic composition guarantees an you an occupation. Huxley and Scott have established quite a few concerns for our future. Strangely though, they have also warned about issues that are in need of conservation now. Again, close your eyes and imagine the natural world that you want in the future. Consider our context year 12, and help to create an ethically harmonious world for the future. ASSESSMENT TASK TWO HSC ENGLISH ADVANCED MODULE A: "In the Wild" COMPARATIVE STUDY OF TEXTS AND CONTEXTS PRESENT AN ANALYSIS OF HOW THE COMPOSERS OF YOUR TWO PRESCRIBED TEXTS (BRAVE NEW WORLD AND BLADE RUNNER) PRESENT THEIR CONCERN FOR HUMANITY AND ITS RELATIONSHIP WITH THE NATURAL WORLD AND NATURE'S INFLUENCE ON HUMAN BEHAVIOUR AND HUMAN INTERACTION Hayley Watson HENA1 MARY LAWSON 1 UNIFEM 2000 www.unifem.org ...read more.