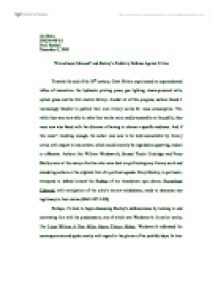 Joe Bohn ENG344W-01 Prof. Hubbell December 5, 2000 "Prometheus Unbound" and Shelley's Prefatory Defense Against Critics Towards the end of the 18th century, Great Britain experienced an unprecedented influx of innovation: the hydraulic printing press, gas lighting, steam-powered mills, optical glass and the first electric battery. Amidst all of this progress, authors found it increasingly feasible to publish their own literary works for mass consumption. Yet, while they were now able to make their works more readily accessible to the public, they were now also faced with the dilemma of having to choose a specific audience. And if this wasn't troubling enough, the author was now to be held accountable by literary critics with respect to any content, which could remotely be regarded as upsetting, radical or offensive. Authors like William Wordsworth, Samuel Taylor Coleridge and Percy Shelley were at the mercy of critics who were bent on politicizing any literary work and slandering authors at the slightest hint of a political agenda. Percy Shelley, in particular, attempted to defend himself the Preface of his Aeschylean epic drama, Prometheus Unbound, with anticipation of the critic's narrow-mindedness, ready to denounce any legitimacy to their claims (MM 1407-1409) Perhaps, it's best to begin discussing Shelley's defensiveness by looking to and contrasting him with his predecessors, one of which was Wordsworth. In earlier works, like Lines Written A Few Miles Above Tintern Abbey, Wordsworth addressed his contemporaries and spoke mostly with regard to the glories of his youthful days. ...read more.

a passion for reforming the world" (Wheatley 110). This seems to contradict his statement in the same paragraph that states: "Didactic poetry is my abhorrence"(Wheatley 110) He proceeds by justifying these seemingly contradictory statements: My purpose has...been...to familiarize the highly refined imagination of the more select classes of poetical readers with beautiful ideas of moral excellence. (Wheatley 127) Shelley quickly became aware that reviewers were responding negatively to his poem, which suggested uncanny contradictions. Prometheus renounced Jupiter's curse, what William Blake would have called the removal of self-imposed "mind-forged manacles," originally brought about by mere hate and unwillingness to forgive. This event would seem to empower the individual and promote passivity, yet Jupiter's violent removal from his throne by Demogorgon encourages something radically different. Critics wondered if Shelley dared man to challenge institutions. Either way, Shelley does not provide a sound solution for reform or revolution. (Wheatley 113) In a letter to an editor named Leigh Hunt, Shelley defends Prometheus Unbound, saying, "It is written only for the elect" (Wheatley 110). By proclaiming that his drama was meant for the elect classes, Shelley might have meant to diffuse possible objections to the radical content of his poem, since the morally elite thought themselves to be incorruptible. In the midst of critics focusing on Jupiter's violent overthrow, Shelley still chose to focus on and defend his Prometheus, insisting that his was "a more poetical character than" Milton's Satan, because of his "patient opposition" to Jupiter, the king of all gods on Mt. ...read more.

It seems that he means to empower himself and continue this tradition of societal obligation through his own works. The last consideration I make is perhaps one that most spited and thumbed at his critics, causing them to slander him more than they would have otherwise. Shelley begins his preface to "Prometheus..." by stating that his predecessors, "The Greek tragic writers" were able to select any topic, employ history or mythology and "by no means conceived themselves bound to adhere to...or to imitate...their rivals or predecessors." Hence, Shelley means to dispel any preconceived criticisms of his subject matter. He implies that the writer has a lineage and the critic does not, hence the critic possesses a self-proclaimed title that carries no historical integrity. In conclusion, late 18th century Britain's unprecedented influx of innovation made it possible for an increased number of authors to publish literary works for mass consumption. They were suddenly faced with having to choose and write for a specific audience. Also, the author was now to be held accountable by literary critics with respect to content. Unlike most of his contemporaries, Percy Shelley expressed problematic and potentially explosive ideas that caused him to be bombarded by slanderous criticism. With regard to Prometheus Bound, he had anticipated the literary critic's narrow-mindedness and was prepared-with his preface, to denounce any legitimacy to their claims (MM 1407-1409). Today, critics realize that "Prometheus..." was meant to address both the socially elite reviewer and the public simultaneously. ...read more.