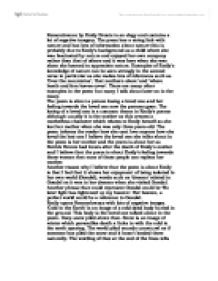 Remembrance by Emily Bronte is an elegy and contains a lot of negative imagery.

Remembrance by Emily Bronte is an elegy and contains a lot of negative imagery. The poem has a string link with nature and has lots of information about nature this is probably due to Emily's background as a child where she was fascinated by nature and enjoyed her own company rather than that of others and it was here when she was alone she learned to appreciate nature. Examples of Emily's knowledge of nature can be seen strongly in the second verse in particular as she makes lots of references such as 'Over the mountains', 'that northern shore' and 'where heath and fern leaves cover'. There are many other examples in the poem but many I talk about later on in the essay. The poem is about a person losing a loved one and her feeling towards the loved one now the persons gone. The losing of a loved one is a common theme in Emily's poems although usually it is the mother as this creates a motherless character which relates to Emily herself as she lost her mother when she was only three years old. The poem informs the reader how she cant love anyone how she loved the lost one I believe the loved one she talks ...read more.

Emily uses personification in the final line of the opening verse with 'Severed at last by times all severing wave?' It is relating to the death of the loved one. Also it ends with a question mark yet there is no obvious question in the line. I do not understand the reason for this being here. 'Now, when alone, do my thoughts no longer hover' This relates to Emily as she likes to be alone and she feels best when alone but when she is with people maybe she feels intimidated or scared so she wont seem normal and this is what she meant when she wrote 'when alone do my thoughts no longer hover' she can only act normal when alone. The second and third verse both contains images of angels. 'Resting their wings' and 'spirit' are both strong religious images. These are significant because they show the reader she had a religious understanding which she got form from her background with her father being a priest. Other words with religious significance in Remembrance include 'Faithful' which relates to any religion means being loyal to the subject. Emily was faithful to her loved one and is still faithful to the spirit of the loved one. ...read more.

All these words are powerful and have an effect. 'But when the days of the golden dreams had perished/and even despair was powerless to destroy/Then did I learn how the existence could be cherished/strengthened and fed without the aid of joy.' I understand this verse to mean that once she realised that the loved one wasn't coming back she carried on her life like normal but could never be fully satisfied with her life. The verse that follows uses a variety of interesting words. She used useless to personify passion. She has described one of man's strongest emotions as useless which is quite a powerful statement to make. This helps the reader understand her pain. In the line after she personifies her soul to pursue her which is an odd statement to make and also she describes her soul as young which gives it the image of being innocent and as the soul is part of the person it makes the person writing the poem/character in the poem seem young and innocent. Earlier in the poem we had heaven and angels now we have a contrast with the word burning, a negative image which is often referred to as an image of hell. The final word I fought was interesting in the verse was tomb. ...read more.