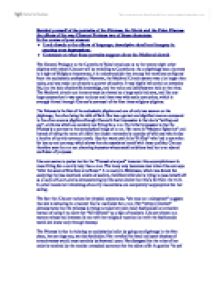 Remind yourself of the portraits of the Prioress, the Monk and the Friar. Discuss the effects of the way Chaucer Portrays two of these characters.

Remind yourself of the portraits of the Prioress, the Monk and the Friar. Discuss the effects of the way Chaucer Portrays two of these characters. In the course of your answer: * Look closely at the effects of language, descriptive detail and imagery in creating your impressions. * Comment on what these portraits suggest about the Medieval church The General Prologue to the Canterbury Tales introduces us to the twenty-eight other pilgrims with whom Chaucer will be travelling to Canterbury. As a pilgrimage was a journey to a sight of Religious importance, it is understandable that among the travellers are figures from the ecclesiastic profession. However, the Medieval Church system was a lot larger than today, and was made up of nearly a quarter of society. It was highly influential on everyday life, due the lack of scientific knowledge, and the value and belief system held at that time. The Medieval church can in some ways be viewed as a large-scale industry, and like any large corporation it was open to abuse and there was wide scale corruption, which is strongly hinted through Chaucer's portrayal of the first three religious pilgrims. ...read more.

Chaucer shows us a woman whose real interests lie not with her religious vocation but with the fashionable world she know only through hearsay. The Prioress in fact is violating an ecclesiastical edict by going on pilgrimage in the first place, her pet dogs too, are also forbidden. Her unveiled for head and open displays of attractiveness would most certainly be frowned upon. Her disregard for the rules of her order is matched by the monks unmasked contempt for the edicts of St Augustine "he yaf nat of that text a pulled hen." This reveals a comic incongruity between expectation and reality and may represent a conscious criticism of the corrupt state of the church at this time From the description of his physical appearance, the Friar, like the prioress does not seem to fit the image associated with ecclesiastical figures. "His nekke whit was as the flour-de Lys." Which seems unusual because normally only people from the gentry class had fair skin, as they were able to stay indoors. Friars were licensed to beg within a specified area and therefore would be expected to be outside. ...read more.

Lastly Chaucer reveals the Friar's corrupting misuse of confession-one of the greatest sacraments of the church. "For unto a povre ordre for to yive is signe that a man is wel yshrive" he turns confession into a painless business arrangement illicitly inviting the rich to buy absolution without the discomfort of doing penance, "therefore instede of wepinge and preyeres, men moot yeve silver to povre freres." This cynical exploitation of his faith is unchristian and immoral. Yet the Friar stoops even lower by manipulating the poor and vulnerable, "for thogh a wiwe hadde noght a sho... yet wolde he have a ferhing er he wente." This is more than immoral; the Friar is preying on innocent victims for money, when their need is far greater than his own. While Chaucer treats the Prioress and the monk with an amused indulgence, recognising that they do not actually harm their religion though they regard its rules and principles so lightly and are both unsuited to their holy vocation, being more interested in worldly rather than spiritual matters. But the Friar seems to evoke a sense of outrage in Chaucer, which he voices through scathingly ironic remarks, "there nas no man nowher so vertuous." ...read more.