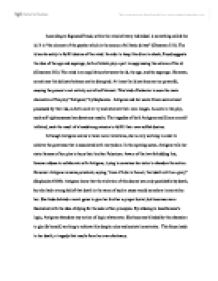 Review of &quot;Antigone,&quot; by Sophocles.

According to Sigmund Freud, within the mind of every individual is something called the id. It is "the element of the psyche which is the source of all basic drives" (Glassman 211). The id works solely to fulfill desires of the mind. In order to keep this drive in check, Freud suggests the idea of the ego and superego, both of which play a part in suppressing the actions of the id (Glassman 212). The mind is an equilibrium between the id, the ego, and the superego. However, sometimes this delicate balance can be disrupted. At times the id can become too powerful, causing the person to act entirely out of self interest. This kind of behavior is seen the main characters of the play "Antigone," by Sophocles. Antigone and her uncle Creon seem almost possessed by their ids, as both work to try and venerate their own images. As seen in the play, such self-righteousness has disastrous results. The tragedies of both Antigone and Creon are self-inflicted, each the result of a headstrong mission to fulfill their own selfish desires. Although Antigone seems to have moral intentions, she is only working in order to achieve the greatness that is associated with martyrdom. ...read more.

This is seen when she deliberately breaks the law established by King Creon, and embraces the idea of the impending and grim consequences. As with modern-day governments, disregard for the rules results in punishment. This is the sentence that the irrational Antigone faced, and she welcomed it with open arms. Her passion to achieve acclaim mixed with indifference toward any opinions but her own served as precursors to her exile and her death. Creon's dialogue throughout the play shows that his role as ruler of Thebes was entirely focused on self gain. Creon's first appearance in the play is in the form of a monologue where he ponders the meaning of becoming king. His speech is condescending and superior from the very beginning of the piece, especially when Creon proclaims that he will "now possess the throne and all its powers" (Sophocles 67.193). Creon's tone of this statement, and of the whole monologue, sounds greedy. He only speaks of what the title of king can bring him, and how he will handle opposition to his authority. He becomes fascinated with the amount of control he has, and becomes adamant about keeping the position. ...read more.

Perhaps an underlying theme specific to this play is the idea that the characters bring tragedy upon themselves. Both characters, although presented in very different lights in the play, shared one characteristic of their personalities that contributed to their misfortune. Antigone and Creon were both incredibly headstrong individuals, so confident in their convictions that they were unable to comprehend the consequences of their actions. Her logic corrupted by the prospect of martyrdom, Antigone glorified the idea of death instead of fearing it. In the end, Antigone hung herself in order to escape her insanity; it was not in the name of her principals. The throne possessed a great deal of power, and Creon used this to enforce rules and actions that would ensure his survival as king. Unfortunately for Creon, his behavior lead to the suicides of his son and wife. Perhaps it is the element of tragedy that has kept people intrigued with this play. The need for respect is something that all people can identify with, as humans have an inherent need for attention. People watch this need expand tenfold in these characters, and cannot help but sympathize with them. Antigone and Creon's stubborn behavior triggered their respective tragedies in this Sophoclean drama, a concept that has held the attention of the general public since the time of Ancient Greece. ...read more.