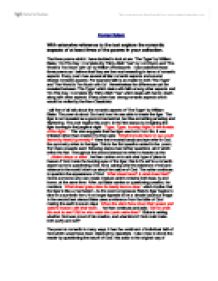 romanticism in 'The Tyger' by William Blake, 'On This Day I Complete My Thirty-Sixth Year' by Lord Byron and 'The World is Too Much with Us' by William Wordsworth.

Romanticism With extensive reference to the text explore the romantic aspects of at least three of the poems in your collection. The three poems which I have decided to look at are: 'The Tyger' by William Blake, 'On This Day I Complete My Thirty-Sixth Year' by Lord Byron and 'The World is Too Much with Us' by William Wordsworth. I have selected these three poems as I believe that they are the most rewarding in terms of romantic aspects. Every poem has several similar romantic aspects and several diverse romantic aspects. For example faith is an matter in both 'The Tyger' and 'The World is Too Much with Us'. Nevertheless the differences can be revealed between 'The Tyger' which deals with faith among other aspects and 'On This Day I Complete My Thirty-Sixth Year' which deals with heroic death along with other aspects. Every poem has strong romantic aspects which would be reviled by the Neo-Classicists. I will first of all talk about the romantic aspects of 'The Tyger' by William Blake. The poem is about God and how He was able to create the tiger. The tiger is not revealed as a good or bad animal, but like something amazing and frightening. ...read more.

During the second stanza he thinks that he is going to die and that 'the flowers and fruits of love are gone'. During the third stanza he thinks of himself as lonely and isolated 'Is lone as some volcanic isle; No torch is kindled at it's blaze - A funeral pile.' In addition he shows how he feels unloved and uncared for. By considering the first three stanzas you can notice that there are feelings which change all the time, this is a romantic aspect as Byron shows how he is thinking. He continues talking about how he is weighed down by love and how he is depressed. In the fifth stanza he remembers that he is in Greece and says he shouldn't think pessimistically in the land of heroism, soul and bravery: 'But 'tis not thus - and 'tis not here - such thoughts should shake my soul, nor now, where glory decks the hero's bier, Or binds his brow.' This is romantic as it refers to heroism and how heroic deaths are remembered. During the next stanza Byron mentions that he has glory, the battlefield of Greece and that he shouldn't be thinking about death: 'Glory and Greece, around me see!' In following stanza Byron speaks of Greece as the parent and the source of Western life and education: 'Awake! ...read more.

Wordsworth ends by saying how he might then be able to see images of ancient gods rising from the waves. The poet pictures 'Proteus rising from the sea' and 'Triton blowing his wreathed horn.' There are many romantic aspects throughout the poem, the most common and obvious being nature. Nature was a huge part of Wordsworth's life and he even worshipped it thinking that God was there in nature. In addition questioning faith and rejecting conventional feelings by saying that he wants to be a Pagan is a romantic aspect as writers looked inwards for God, not towards religious rituals. Moreover, ancient religion was of huge importance during the romantic period. Then there is also genuine, straightforward passion which would be rejected by classicists. Wordsworth uses very simple words, portraying how passionate he is about nature and how important it is to him. The poem is a sonnet and is divided into two parts, an octave and a sestet. The rhyme scheme of the octave is ABBAABBA, and the sestet follows a rhyme scheme of CDCDCD. This shows some dramatic power which is romantic as it is unusual. Overall all three of poems have firm connections with romanticism and are full of passion and unusual feeling. The three poems use language and thoughts which would have been detested by the classicists and are consequently very interesting. ?? ?? ?? ?? Romanticism 24th February 2005 ...read more.