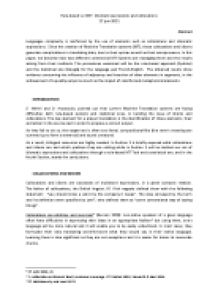 ﻿Rule-based vs. SMT: Idiomatic expressions and collocations 17 juin 2011 Abstract Languages complexity is reinforced by the use of elements such as collocations and idiomatic expressions. Since the creation of Machine Translation systems (MT), those collocations and idioms generate complications in translating data, due to their syntax as well as their omnipresence. In this paper, we describe how two different commercial MT Systems are managing them and the results arising from their methods. The procedures examined will be the rule-based approach (Systran) and the statistical one (Google) for the language pair French-English. The obtained results show evidence concerning the influence of adjacency and insertion of alien elements in segments, in the achievement of a quality output as much as the impact of colorful and metaphorical elements. INTRODUCTION E. Wehrli and D. Anastasiou pointed out that current Machine Translation systems are facing difficulties both rule-based systems and statistical ones, in tackling the issue of idioms and collocations. The key element for a proper translation is the identification of those elements, their extraction in the source-text in order to propose a correct output. As they fail to do so, the target text is often too literal, compositional-like (the term?s meaning are summed up to form a sentence) and sound unnatural. As a result, bilingual resources are highly needed. In Section 2 is briefly exposed what collocations and idioms are and which problem they are setting while in Section 3 will be tackled our set of idiomatic expressions and collocations through a rule-based MT Tool and a statistical one, and in the fourth Section, stands the conclusions. COLLOCATIONS AND IDIOMS Collocations and idioms are subclasses of multiword expressions, in a given syntactic relation. ...read more.

is mistakenly translated ?struck coffee? The system just added the meaning each word has separately to propose a translation. A refuse to translate, a different meaning is conveyed: e.g.: chercher des noises (pick a quarrel with) for which only the verb was translated: the system didn?t recognize the word ?noises? and let it in its French form and which has another meaning in English: a sound, something audible while in French it means ?problem?. CONCLUSION In this article, it has been shown how the rule-based system and the statistical one were treating collocations. It appeared that in the process of translating continuous segments, Google statistical approach is more efficient than the Systran rule-based approach. In fact, out of 38 sentences, Systran failed to find a non-literate translation for 28 of them while Google managed to translate 16 of them. The fact that most of them were colorful expressions, metaphorical or that the words used were polysemous caused troubles. Google?s better outcomes result from the fact that it is corpus based, and it may be confronted with collocations with the large amount of texts it requires for its translations. Systran is not well equipped to succeed with only a grammatical approach. The words association in collocations gives a meaning to the segment that cannot be expressed with other words: if the systems do not have the expression, collocation, idiom, registered in their data-base, the probability that they will provide a non-literate translation is very remote. The systems will tend to stick to the source language in order to be able to convey the text. The meanings of each sole word will be added and this is the major problem for MT Systems. ...read more.