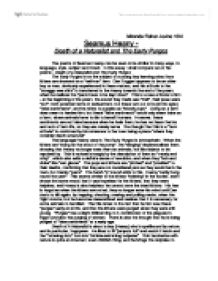 Miranda Fisher-Levine 10N Seamus Heany - Death of a Naturalist and The Early Purges The poems of Seamus Heany can be seen to be similar in many ways, in language, style, subject and mood. In this essay I shall compare two of his poems - Death of a Naturalist and The Early Purges. The Early Purges is on the subject of a young boy learning about how kittens are drowned on a "well-run" farm. Dan Taggart appears to be an older boy or man, obviously experienced in these matters, and his attitude to the "scraggy wee shits" is transferred to the Heany towards the end of the poem, when he realises the "pests have to be kept down". This is a new attitude to him - at the beginning of the poem, the sound they made was "frail", their paws were "soft", both potential terms of endearment, but these turn out to be (in his eyes) "false sentiments", and he refers to puppies as "bloody pups". Living on a farm does seem to harden him, but these "false sentiments" would only seem false on a farm, where animals have to die to benefit humans. However, these sentiments are not false because when he feels them, he has not learn the ins and outs of farm life, so they are merely na�ve. The thought that this is a "farm attitude" is confirmed by his reference to the town being a place "where they consider death unnatural". ...read more.

The second stanza provides a marked change in mood - suddenly, nature becomes threatening, and the way the "daddy frog" "croaked" in the first stanza suddenly becomes "a coarse croaking" and "their blunt heads fart". The innocent tadpoles he watched have become "gross-bellied frogs", "angry" creatures that "invaded the flax-dam" and made "obscene threats". The last line is particularly interesting. It says that if he "dipped" his "hand the spawn would clutch it". This is a curious role reversal - earlier in the poem, he took the frogspawn and after he sees the frogs, his thought is that the spawn becomes vengeful, and wants to take him, almost to revenge the stolen spawn of the previous year. The language Heany uses is very effective in this poem - the sounds of "clotted" and "slobber" evoke a very accurate image of frogspawn, and the alliteration - "wait and watch", "strong gauze of sound around the smell", "the flax-dam festered" - adds to the aura of fascination that surrounds the poem. The second stanza begins with the word "Then", correctly implying that there has been a change. The onomatopoeic "slap and plop" of the frogs and their "blunt heads farting" combined with the assonance of "cocked", "sods", "hopped" add a sense of discomfort; the language and style of the second stanza combine to provide an effective and evocative mood of aggression and fear. The title implies that there is a death in the poem, but the boy does not die. ...read more.

position, if only to protect myself from the harsh reality that more animals means buying more food, and that means spending more money. Country life is very different to city life, and I, having experienced both, can appreciate that to a certain extent. The poem is very poignant, and I like Heany's use of language when describing the kittens, and, as I am a cat lover, it inspires quite deep feelings in me. The reference to his early feelings as "false sentiments" does not ring true to me. I think that there is no such thing as a false sentiment, there are merely different sentiments that can develop according to how one is brought up and what one experiences. Death Of A Naturalist does not appeal much to me. The subject seems to be a little asinine, but that is judged only on my personal experience - when I was younger, all of nature fascinated me, especially frogs, and I loved the way they croaked and splatted, so I cannot see how that could intimidate or scare a child. His use of language is effective, though, and I like his description of the flax-dam; it is easy to visualise this hot, aromatic, noisy place where a portion of Heany's childhood took place. It would seem that these two of Heany's poems are similar in many ways. It shows that Heany had a childhood in the country, flooded with nature and tells how it affected his childhood. 1,469 words ...read more.