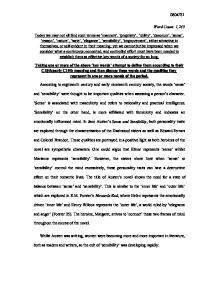 Sense and sensibility in 'Howard's End' and 'Sense and Sensibility'

Word Count: 1,243 Today we may not all find such terms as 'manners', 'propriety', 'utility', 'decorum', 'sense', 'reason', 'nature', 'taste', 'elegance', 'sensibility', 'improvement', either attractive in themselves, or self-evident in their meaning; yet we cannot but be impressed when we consider what a continuous, concerted, and controlled effort must have been needed to establish them as effective key words of a society for so long. Taking one or more of the above 'key words' attempt to define them according to their C18th/early C19th meaning and then discuss these words and the qualities they represent in one or more novels of the period. According to eighteenth century and early nineteenth century society, the words 'sense' and 'sensibility' were thought to be important qualities when assessing a person's character. 'Sense' is associated with masculinity and refers to rationality and practical intelligence. 'Sensibility' on the other hand, is more affiliated with femininity and indicates an emotionally influenced mind. In Jane Austen's Sense and Sensibility, both personality traits are explored through the characterisation of the Dashwood sisters as well as Edward Ferrars and Colonel Brandon. These qualities are portrayed in a positive light as both heroines of the novel are sympathetic characters. One could argue that Elinor represents 'sense' whilst Marianne represents 'sensibility'. ...read more.

However, this practical intelligence is shown in a positive light through Elinor, the heroine. The story of the novel is told through her eyes and she embodies all of Austen's ideal qualities in a woman: she is patient, good looking and possesses a strong and realistic mind. Those who can appreciate her good nature admire her, but the more shallow characters such as Fanny Dashwood and Lady Middleton envy her. Elinor's character is best shown through her distress when she discovers that Edward is engaged to Lucy. She does not envy Lucy, but instead is sad that Edward has 'not even the chance of being tolerably happy in marriage' (Austen 145). Elinor is able to analyse situations thoroughly before casting judgement, showing that she favours 'sense' over 'sensibility'. When Elinor reveals Edward and Lucy's engagement to Marianne, Marianne is shocked, exclaiming, 'So calm! So cheerful! How have you been supported?' and Elinor explains that she managed 'By feeling that [she] was doing [her] duty'. Elinor's selflessness can be seen when she says, 'I did not only love him; - and while the comfort of others was dear to me, I was glad to spare them from knowing how much I felt. Now, I can think and speak of it with little emotion.' ...read more.

By the end of Sense and Sensibility the Dashwood sisters have found the right balance of 'sense' and 'sensibility' to be happy in marriage. Elinor marries Edward, a male representative of 'sensibility' and we can see this from how morally responsible he feels and how self sacrificing he is concerning Lucy. However, Edward's 'sensibility' conforms to the constraints of his society, showing that he has the right balance of 'sense' and 'sensibility'. Marianne marries the male representative of 'sense', Colonel Brandon. Many believe this union acts as a punishment for Marianne having behaved inappropriately earlier on with Willoughby. This is shown when Willoughby tells Marianne, 'There are some people who cannot bear a party of pleasure. Brandon is one of them.' (Austen 62) However, in my opinion, though Brandon may at first appear dull, he is arguably the most romantic character in Sense and Sensibility. He falls in love with Marianne at first sight, partially due to her resemblance to the love of his life, who married his brother and whose daughter was treated appallingly by Willoughby. Brandon shows his 'sensibility' and concern for Marianne when he says that Marianne and Eliza's 'fortunes cannot be the same' (Austen 201). Marianne and Elinor learn from their husbands and one another, the importance of balance between 'sense' and 'sensibility' in the society which they belong to and how to articulate sentiment whilst remaining dignified. ...read more.