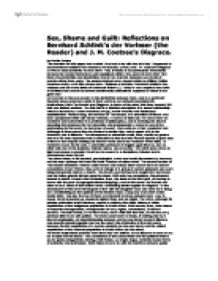 Sex, Shame and Guilt: Reflections on Bernhard Schlink's der Vorleser (the Reader) and J. M. Coetzee's Disgrace. by Martin Swales The occasion for this paper was twofold. One had to do with the fact that I happened to read Bernhard Schlink's Der Vorleser (The Reader) (1995) and J. M. Coetzee's Disgrace (1999) in close proximity to each other. This, in itself, is not particularly remarkable because the novels themselves were published within a few years of each other. But there are proximities and proximities; and in my case the closeness was made of months rather than years. The second catalyst was a recent article by William Collins Donahue which, as its title makes clear--'Illusions of subtlety: Bernhard Schlink's Der Vorleser and the moral limits of Holocaust fiction' (1)--takes a very sceptical view both of Schlink's tale and of the almost unanimously enthusiastic response to which it has given rise. Let me turn to the two novels: to the similarities between them, and to a particular thematic issue common to both of them which is not without its problematic implications. Both The Reader and Disgrace, in terms of the story that they recount, fall into two distinct sections. The first half is a detailed description of a sexual relationship which is skewed by a crass imbalance of age, moral maturity and intellectual sophistication. Michael Berg, the narrator of The Reader, is a schoolboy of fifteen who has a passionate affair with Hanna Schmitz, a woman of thirty-six. He comes from an academic home (his father is a professor of philosophy), and is receiving the kind of schooling that prepares him for university and subsequently a career in one of the professions (in the event, he becomes a lawyer). She works as a tram conductor and (although it takes some time for Michael to realize this, and to speak of it in his narrative) she is illiterate. ...read more.

New Dehli: Atlantic Publishers and Distributors, 2003. v + 176 pp. $19.00 In his introduction, Jopi Nyman argues that animal narratives in literature are "ways of reimagining human identities rather than stories merely narrating the lives of our furry friends." Indeed, throughout his book, Nyman shows how such stories take part in the discursive construction of concepts like race, family, and nation. Reading the texts he discusses as cultural and historical artifacts, he investigates the animal as Other, showing how this trope is "utilized to explore racial, sexual, and gendered threats to the maintenance of naturalized social hierarchies." Part One, on British colonial discourse and its role in the construction of English national identity, includes discussions of Beatrix Potter's "Peter Rabbit" tales and Rudyard Kilping's The Jungle Book. Part Two, which shifts focus to North American texts of the late nineteenth and early twentieth centuries, shows how writers like Jack London use animal narratives to explore Otherness, racial mixing, and passing. Primarily concerned with late colonial and imperial writing, Part Three looks at autobiographical representations of animals. Here Nyman argues that popular books by Joy Adamson and Gerald Durrell reproduce colonialist views while simultaneously showing "ruptures and gaps" in such ideologies and suggesting "a crisis in the culture of colonialism." The final section discusses postcolonial and ethnic narratives from South Africa and the United States. In an especially interesting chapter connecting Coetzee's Disgrace with its colonial predecessor, Sir Perry Fitzpatrick's Jock of the Bushveld, Nyman shows how each work uses the animal trope to "explore a transcultural space where colonial identities are constructed as a result of negotiation and conflict." In total, Nyman succeeds in encouraging readers to reconsider these texts as not just simple animal stories, but complex representations of human identity. 44444(taken from a book chapter) The art of the undeniable I wish now to turn to a different tradition of South African writing - that of, political poetry and political protest literature. ...read more.

Well, as readers here know, there has been a flood of novels and memoirs written-mainly by those who have faced life-threatening disease-addressing ethical problems of medicine. Most of them are written from the patient's point of view, often revealing just how much difference can result from the diverse ethical stances that doctors take as they perform their treatments. And too many of them, from my "moralistic" perspective, follow Hellenga and Roth in failing to address the complex issues that their stories reveal. However, unlike Hellenga and Roth, they work hard to underline this or that moral point, ignoring the ambiguities and complexities. The possible candidates for the role of "genuine educators about medical ethics and the ethics of dying" are innumerable. Tolstoy's "The Death of Ivan Ilych," Richard Powers's Gain or Wandering Soul, Pat Barker's Regeneration, Saul Bellow's Ravelstein (the final section, really a report on Bellow's own illness), Reynolds Price's A Whole New Life: An Illness and a Healing, Fran�ois Mauriac's Knot of Vipers, and so on. For the sake of brevity, consider a brilliant recent novel now receiving rave reviews, David Lodge's Thinks.... 15 Because the heroine and her would-be lover dispute, often quite profoundly, about the contrast between literary and scientific treatment of human consciousness, the whole book could be considered relevant to this essay. But I must concentrate on only one moment, hoping that my discussion will not spoil the book's plot for those who have not yet read it. Helen, the novelist who has to her own surprise finally fallen in love with Messenger, the dogmatically mechanistic cognitive scientist, suddenly learns that he may have fatal liver cancer. In their long discussions of how to deal with his illness, she is shocked by his request that if the diagnosis turns out to be positive, she must, if she loves him, provide some kind of assisted suicide. He insists that he will not face the miseries of extended painful and pointless treatment of the kind the heroine of Wit received. 666666666 ...read more.