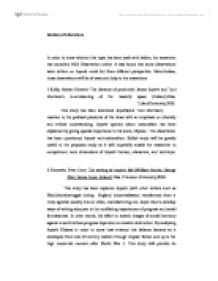 Review of Literature: In order to know whether this topic has been dealt with before, the researcher has consulted MUI Dissertation online .It was found that some dissertations were written on Joyce's novel but from different perspective. Nevertheless, these dissertations will be of esteemed help to the researchers 1-Kelly, Marian Herstein 'The distance of proximity': James Joyce's and Toni Morrison's re-envisioning of the readerly space (Ireland).Diss. TulaneUniversity,2005. This study has been examined Joyce's(and Toni Morrison) ...read more.

2-Horowitz, Evan Cory. The writing of modern life (William Morris, George Eliot, James Joyce, Ireland).Diss. Princeton University,2006. This study has been explored Joyce's (with other writers such as Eliot,Morris)struggle during England industrialization transformed from a rural, agrarian society into an urban, manufacturing one. Joyce tried to develop ways of writing adequate to the conflicting experiences of progress and social formlessness. In other words, his effort to sustain images of social harmony against a world whose progress depended on creative destruction. ...read more.

The University of Nebraska-Lincoln,2005. This study has been analyzed James Joyce's Dubliners, which conducts a series of narrative experiments with allusion, and in doing so suggests a new literary criticism based upon the allusive process. This study has been revealed allusive mechanics and how the allusive process and the act of reading can become pitfalls of thought, imprisoning readers within the act of signification. Connor's dissertation will be beneficial to the current study as it will shed light on Joyce's other techniques and his effort in literary criticism. ...read more.