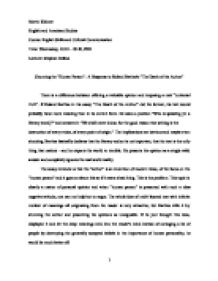 Shunning the Human Person: A Response to Roland Barthes's The Death of the Author

Shunning the “Human Person”:  A Response to Roland Barthes's “The Death of the Author”

There is a difference between offering a valuable opinion and imposing a new “universal truth”. If Roland Barthes in his essay “The Death of the Author” did the former, his text would  probably have more meaning than in its current form. He asks a question “Who is speaking [in a literary work]?” and answers it: “We shall never know, for the good reason that writing is the

destruction of every voice, of every point of origin.“ The implications are obvious and maybe even shocking. Barthes basically declares that the literary author is not important, that the text is the only thing that matters - and he expects the world to tremble. He presents his opinion as a single valid answer and completely ignores the real world reality.

The essay reminds us that the “author” is an invention of modern times, of the focus on the “human person” and it goes on about this as if it were a bad thing. This is the problem. This topic is clearly a matter of personal opinion and when “human person” is presented with such a clear negative attitude, one can not help but to argue. The whole idea of multi-layered text with infinite number of meanings all originating from the reader is very attractive, but Barthes kills it by shunning the author and presenting his opinions as unarguable. If he just brought this idea, displayed it and let the deep meanings sink into the reader's mind instead of outraging a lot of people by destroying the generally accepted beliefs in the importance of human personality, he would be much better off.

As one of his examples, Barthes chooses the French poet Mallarmé, who shares his opinions about the “language” being more important than the “author”. “Mallarmé's entire poetics consists in suppressing the author in the interests of writing.” Again, a very unattractive opinion for many. A question lingers in normal person's mind after reading this: “Is the death of the author really worth it then? By suppressing the author, won't he become slave to the text? Won't then the text become a mindless, personality-less game of its own? Is that what we really want?”

Barthes is placing the language above the writer, he makes it something supernatural, almost flawless, something more than the person behind it. What is one to think when he declares: "Linguistically (...) [subject] I is nothing other than the instance saying I."? Throw away the author, he says. Forget him! Focus on the text. The text, the language! Yet he forgets that the – call him normal, average, sane – reader is not really interested in the text, he does not want to learn more about a group of words or paragraphs. He wants to learn about the individual behind it. He wants to connect with him on an emotional level. What Barthes fails to realize is that language is not a goal, it is a tool to express and connect human beings.