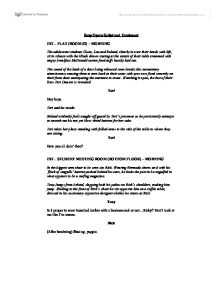 Soap Opera Script and Treatment INT . FLAT (ROOM 52) - MORNING The adolescent students Owen, Lou and Roland, clearly in over their heads with life, sit in silence with the blinds drawn staring at the centre of their table crammed with empty breakfast McDonald carton foodstuffs hastily laid out. The sound of the latch of a door being released soon breaks this momentary attentiveness causing them to turn back in their seats with eyes now fixed securely on their front door anticipating the entrance to come. Watching it open, the lust of their lives Teri Dauson is revealed. Teri Hey boys. Teri ambles inside. Roland evidently feels caught-off guard by Teri's presence as he persistently attempts to smooth out his not yet blow-dried haircut for her sake. Teri takes her place standing with folded arms to the side of the table to where they are sitting. Teri How you all doin' then? INT . STUDENT MEETING ROOM (BOTTOM FLOOR) - MORNING In the biggest arm chair to be seen sits Rick. Wearing Bermuda shorts and with his 'flock of seagulls' haircut pushed behind his ears, he looks the part to be engulfed in what appears to be a surfing magazine. ...read more.

Roland What's got into him all of a sudden? Owen I don't know, but he was in one hell of a mood. Pause. So what are we gonna do about the money? Roland looks up. We could always ask Tony. Roland Ha! No chance. Owen What if we went to see George? Roland George? The mood he's in I doubt he'll have any more jobs going. Owen We're gonna have to do something. INT . FLAT (ROOM 12) - MORNING Jacqueline stands in the kitchen cleaning the dishes wearing an apron and rubber gloves. Ritchie stands far behind looking over. Jacqueline turns around. Jacqueline D'you want a coffee? Kelly Huh? Oh yeah, cheers. Pausing momentarily. You should be at work by now shouldn't you? Kelly Moving around quickly. I'm not going in. Kelly Slowly sitting down on the sofa. Why's that? Jacqueline Stopping what she's doing. Well, I thought we could spend the day together. Kelly Are you not feeling well or something? Jacqueline (smiling) No, it's just I think it's more important for me to be with you right now. Kelly Yeah but mum, I can look after myself, I mean I'm fine honestly. ...read more.

He has regularly been seen using drugs although this is not yet clear to the other characters. Rick Tudor - 20 years old and is featured slightly less frequently. He comes from the couth west and studies geography. His passion in life is surfing and makes it the topic of most of his conversations. Katie Leary - 23 years old and in the midst of a degree in mathematics, training to become a teacher. She is a very kind character who is a friend to everyone. She has been in a relationship with her boyfriend Derek for several years and has a very stable relationship. She also shares a room with Teri. Derek Lewis - 25 years old and is the boyfriend of Katie and the brother of Owen. He works in a repair shop near to the university and is regularly seen with Katie and so is well known by others. Kelly Green - 22 years old and is constantly troubled by family life that is interfering with her degree in accounting. She is an emotional character that is very well supported by her friends. Plots And Themes: The soap shall reflect the domestic concerns of that flatmates share living together. Everything will revolve around the large storylines taking place at the time like the ups and downs of the relationships between people. ...read more.