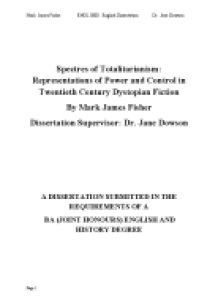 It is important that talking and whispering is an illegal activity because it demonstrates that the citizens of Oceania are unable to express their inner thoughts and feelings. By being unable to express their inner-thoughts and feelings, Winston and his fellow citizens find that their identities are stripped away from them. As a result of their identity being stripped away from them, they become invalids, and thus are deemed to be worthless. Similarly , the fact that Winston?s movements are ?scrutinised? (p.5) demonstrates the technological nature of the regime, as it reveals that the regime analyses everything. By analysing everything, thereby paying close attention to detail, the regime is easily able to protect itself. As a result of being able to protect itself, any illegal or criminal activity, carried out by the citizens of Oceania, is quickly eradicated. Furthermore, the Thought Police carry out surveillance by bugging walls and room devices like the ?wires? (p.5) . The fact that the Thought Police could ?plug in your wire whenever they wanted to?(p.5) is important in revealing that no-one is safe from the regime. Winston?s suggestion that you had to live ?in the assumption that every sound you made was overheard? (p.5) is important because it exhibits the regime?s ability to effectively penetrate the psyche of its citizens. As the regime effectively penetrates the psyche of its citizens, the citizens of Oceania are forced to change their behaviour, and conduct their everyday lives in a regimented manner. It is important that Oceania?s citizens are required to conduct their lives in a regimented manner, as it demonstrates that they become social recluses. As a result of this, they become fixtures of the Party. Surveillance in Orwell?s novel is also mediated through the posters of Big Brother. Orwell explains that: The hypnotic eyes gazed into Winston?s own. It was as though some huge force were pressing down upon you, something that penetrated inside your skull, battering against your brain, frightening you out of your beliefs, persuading you to almost to deny the evidence of your senses. ...read more.

Whilst all these methods are used effectively by dictatorships to control populations, they also prove to have their limits. If there is any method that the regimes most successfully use to wield control over its citizens, it is surveillance and terror. This is because unlike the other two methods, surveillance and terror enables dictatorships to break its citizens, thereby ensuring complete conformity and obedience. At the same time, through these methods of control, this dissertation has shed light on the concept of totalitarianism, and the extent to which Manor Farm, Oceania and Gilead, can be considered to be ?totalitarian regimes?. Although Arendt defined totalitarianism as ?a political system which ensured total domination over all political, social and economic life?, her ideas of total domination are not totally substantiated in all the novels discussed, as some novels display more resistance than others.[64] Out of three different regimes portrayed in the novels, Gilead is proven to be the regime where Arendt?s ideas of total domination are less substantiated, whereas, Oceania and Manor Farm are proven to be the regimes? where Arendt?s views are most substantiated. [65]The Gilead regime proves to be the regime that is less ?totalitarian? because despite its control over the population through surveillance and terror, Offred, and her secret lover Nick, by enrolling in the Mayday resistance organisation, are able to escape, leaving Gilead to disintegrate. [66]On the other hand, Oceania and Manor Farm prove to be the most ?totalitarian? regimes. Whilst by the end of Nineteen Eighty-Four, Winston is effectively broken and converted to the Party?s cause by O?Brien, by the end of Animal Farm, the Pigs rule supreme over the other animals and have replaced the farm?s former owner, thus unveiling a betrayal of the revolution, thereby installing a dictatorship, promoting oppression and inequality.[67] It is this oppression and inequality that writers of dystopian fiction critiqued and warned their readers against, in order to prevent cruelty from happening again, in the contemporary world. ...read more.